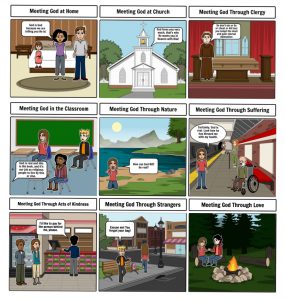 Inspired by this week’s reading of Persepolis, I decided to reflect on my own childhood and transition into adolescence to depict the evolution of my conception of God, and how it was shaped by my surroundings. Much like Marjane, I grew up a bright-eyed, zealous child, eager to lay down my life for God. Whenever I am unsure of the plans for my future, my father always reminds me about the times I would run around the house announcing that I wanted to marry God. Also like Marjane however, my upbringing and my exposure to the world outside of my home unveiled some layers of illusion around which my faith was enveloped.

In the first frame, I depict my spiritual education that began at home. For as long as I can remember, my parents have been devout practitioners of their faith. My mother in particular, took her role as our spiritual teacher very seriously. While I appreciate her efforts immensely, and openly acknowledge that my faith would not be what it is today without her help, looking back, it does slightly resemble indoctrination. Maybe that is just a consequence of having to teach a child through the most simplistic and elementary levels, but the memories I have of faith-building within my family, paired with the teaching I received both at Church, and throughout twelve years of Catholic schooling (as pictured in frames 2-4), seem some degree short of forced.

In the fifth frame, I depict the middle stages of my life where I begin to explore my spirituality in solitude. Curious to discover whether or not the religion of my parents held any truths for my life, I delved into a quest for knowledge that I am still very much on today. In my short, fortunate life, I have been able to get a decent amount of traveling in. My parents, big proponents of paying for experiences and not material things, afforded us some of the most rewarding trips imaginable. Italy, Spain, Yellowstone National Park, Tucson, Mount Rushmore, Niagara Falls, Paraguay, New York, Peru, Mexico. Through all of these travels, I have been able to see a few different sides of this wonderful world, although not nearly enough. If I have learned one thing it is that God is most certainly real.

The last four frames represent an encounter with God through other people. In the sixth, I have encountered God through the suffering of others, and also at times, through my own suffering. Suffering is a fact of life that nobody can escape, but with faith, it becomes clear that pain and suffering will eventually lead to joy, and if that mentality is not the healthiest way to get through this life, I don’t know what is. Frames seven and eight show the inherently good, altruistic nature of humanity. I’ve heard the argument time and time again that people are not inclined to be good; being good is an evolutionary advantage because group cooperation is beneficial for survival. But this is nothing more than a cynical mindset in my view. Too many times have I seen people make sacrifices that could in no way be rewarded, and they do this willingly. I refuse to believe that kindness is a decoy. Finally, in my last frame, I have depicted the encounter of God through love. Although this implies a romantic love, one can meet God wherever love lives. Because unlike the first frame in which the mother has stated “God is God because we are telling you He is,” I now know that God is God because God is love, and love is the realest thing in this world.