I found our readings and discussion from week 6, about Islamic art, to be extremely thought-provoking. Much of Islamic art consists of designs and calligraphy, which can seem unfamiliar to the modern western eye. Figures, when represented, may not look as though they were painted by a western artist. This makes sense, as they were not, but some people seem to take issue with it. In our reading “Misconceptions of the Nature of Islamic Art,” Ismail R. Al-Faruqi quoted M. S. Dimand, “Mohammedan art is essentially one of decoration.”  This is an obvious demotion from the realm of art to one of non-essential frill.  Art is a very interesting concept because it is extremely hard to define. How did Dimand come to the belief that in order for art to be art, it must fit into a certain box containing figures represented as he sees fit? Western art in itself varies immensely. In 1917, for example, Marcel Duchamp submitted an art piece to a show that was just an upside-down urinal taken out of a wall, which he had signed. There was an intense debate following as to whether or not it was a true piece of art. What are the criteria for art to be art? Must you make it? Must it produce an emotional response? Most Islamic art fits both of these criteria, while Duchamp’s piece, “Fountain,” only fits one, and there was a large following of people who said it was art. 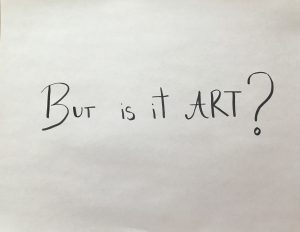 I thought the most accurate way to respond to this debate was with a piece that made you wonder if it was indeed a piece of art. My response “But is it Art?” was created in the medium of pen on paper. So, is this really art? Well, you may initially think it isn’t because it is composed of just four words written on an otherwise blank sheet of paper. I didn’t even come up with them. It is the title of the book in which I first read about Duchamp’s “Fountain.” But I do find it beautiful. It is simple, yet visually appealing. Additionally, there is a deep symbolism found in the piece asking itself a question, “But am I art?”  If this creative response could be considered art, how could Islamic art be simply design, when artists can create pictures out of words from the Qur’an which routinely move viewers to tears.