I decided to center my first blog post on one of the first topics we discussed in class: the power of the word of the Qur’an. In the Qur’an, the power of the word is expressly stated. It is so powerful that many who hear it recited, or recite it themselves, convert on the spot. The story of Umar ibn al-Khattab is a good example. He was a fierce opponent of the prophet and his teachings because they threatened aristocratic life. There are two versions of his conversion story. In one, he overhears a recitation and his heart immediately melts, so he converts. In another, he strikes his sister for following Muhammad, but afterward is ashamed, so he looks at what she is reading and is so struck that he converts.

The power of the Qur’an does not come only from the words; it also comes from the aesthetics. Our reading by Ziauddin Sardar, “Reading the Qur’an” sheds light on this topic. Sardar discusses the importance of reading the Qur’an in Arabic, so the words of God can be experienced in their original form. But even before he could understand the words, reading and listening to the Qur’an was a special and religious experience. To listen to the aesthetics of the reading is to experience the divinity of God’s word. 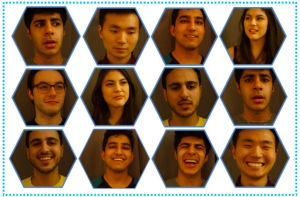 For my creative response, I aimed to capture the reality of this experience. I took a series of photographs of friends while playing a recitation from Ch. 55: Al-Rahman — The Beneficent. They didn’t know what I was going to play so I included a series of photos to capture the changes in expressions. In these, you can see a mixture of thoughtfulness, interest, recognition, surprise, and even a bit of reciting along. What I found very interesting is that for the most part, you can’t tell by the reaction if the person understands the words or is just experiencing the aesthetics of how they sound. Although much of the experience of listening to a Qur’an recitation is too personal to be captured by a portrait, I think the idea of its influence is represented.