This creative response reflects on the idea of differences between Sunni and Shia practices due to the different environments in which the two groups were formed. As I draw from the fourth chapter of Dr. Asani’s “Infidel of Love,” I would like to recognize that these are not the only two communities of interpretation in Islam, nor do all Sunni or Shii Muslims have the exact same practices or beliefs, but I will focus on the main features of the two for this reflection. Groups within Islam formed after the death of the prophet Muhammad. The debate of who was to take over the role of the prophet had two main sides: those who thought he had not named a successor and, therefore, it was their responsibility to concur and appoint a leader, and those who thought Muhammad had appointed his son in law, Ali. The groups could not reach a consensus, so they split and followed the guidance of different leaders, becoming Sunni and Shia, respectively. Sunni Muslims were, and are, the largest group by far, leading to their overwhelming control of power. This led to a belief system for Sunni Muslims which rests on the idea that having power means that you believe in the right things, and Allah looks happily down upon you. Due to this power imbalance, Shii Muslims were regularly persecuted for their differing beliefs, which led to “a distinctive worldview that understood their historical experiences within the broader narratives of the struggle of the righteous against oppression and injustice.” For this reason, martyrs are extremely respected among Shii Muslims. It also led to the existence of the practice of taqiyah, which allows Shii Muslims to avoid harm by lying about their religious beliefs. 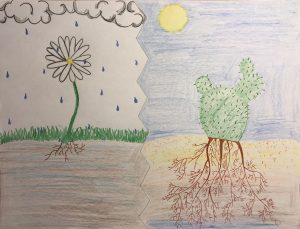 I wanted to represent this difference in my art piece, so I chose to draw two pictures side by side. The first is of a daisy. It has flourished in a nurturing environment with all the water it could need. As a result, its roots do not need to grow very deep. The cactus, however, has struggled to survive. Its environment is harsh, but it adapted. The cactus’ roots grow deep to reach water beneath the surface, and as a result, it is also flourishing. In this piece, the daisy represents Sunni Muslims, and the cactus represents Shii Muslims.  Neither way of life is better than the other — and neither plant is better or more beautiful — but their way of life has been deeply affected by their environment.