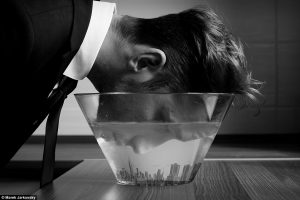 In “The Judgment,” Kafka reflects through his own writing the latent bearing of detrimental internalized homophobia. The veiled descriptions, and obscure narrative of the story, scatter merely dim whispers, which, in chorus, reveal the unspoken truth of repressed homoerotic feelings. Such slips of meaning are seeded within the incongruent emotions of shame and desire, insinuated by the main character for his childhood friend, that are only to be surfaced by the condemning outburst of his senile father.

Homophobia is soaked in shame, as is Georg Bendemann. Throughout the story, he never speaks his friend’s name. Although he is so important to him and occupies his thought with such tentative concern, his name remains a hidden secret. Kafka confirms this hypothesis of shame when the main character infers his friend as “Petersburg” (40). Further evidence of overt shame is admitted to his father when he confessed that he had twice received his friend in his private chamber, secretly (42). On top of which, his reluctance to announce his engagement is weaved with self-projected arguments of probable alienation, oppression, humiliation, and offense, that his friend is perceived to suffer (36). In internalized homophobia, feelings of shame are only one side of the coin, on the other side, sits desire.

His longing for his friend is eminent from the very beginning, as his gaze traces a romantic stroll across the river, moments after sealing a letter to him (35, 39). It is in this letter that he encloses his manipulative effort to smoothly coerce him to attend his wedding (39). It is noticeable that he yearns him; as his overdue visit back home, is repeatedly remarked in the text, with increasing awareness and discomfort to Georg, that his friend is making excuses for his prolonged absence (35, 36, 39, 42, 47). His vulnerable feelings are no longer concealed, as he daydreams and exclaims: “Why had he had to move so far away!” (44)

His forbidden feelings surface to consciousness when his father rampantly challenges him. He embarks by demanding steadily the truth, but soon he enters an uninhibited confrontation that abruptly breaks down all of Georg’s defenses (41, 44).

“He would have been a son after my own heart.”

“That’s why you lock yourself up in your office…”

“A father doesn’t need lessons to help him see through his son.”

During his father’s delirium, Georg realizes that he is morally defeated and exposed towards both his father and his friend, whom he is unlikely to see ever again. Shattered under the weight of shame and rejection, he surrenders to his father’s judgment.

The lurking theme of internalized homophobia is faintly evident to the reader, as it is to the main character. The strong sensations that comprise it, on the other hand, are fairly distinguishable. As shame and desire echoed each other in discrete rhythm, Georg was able to go about his Sunday morning undisturbed. Only when his father, standing on the top of his bed, as a sea captain on his ship, flooding his awareness, until the truth reached the surface, he was ultimately sunk to his own death.

2 thoughts on “A Mortal Judgment of Internalized Homophobia”