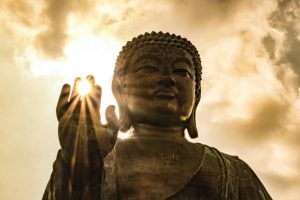 Herman Hesse uses clothing and appearance to reflect the changing life-cycles of Siddhartha on his spiritual path to Nirvana. Concurrent with the teachings of the Buddha, that all matter goes through birth and rebirth, and that all beings go through cycles of transformations; in the same manner, the protagonist also perpetually changes and evolves throughout his life. As his search for meaning remains unsatisfied by the teachings of the Brahmans, he reinvents himself and joins the Samanas in the forest to reach his innermost self, through prayer and fasting. Respectively he soon realizes that Nirvana is not some virtue that can be taught with words, and forth he must wonder on his own in order to find the path of wisdom. Siddhartha’s journey to enlightenment is illustrated by his clothes and changing appearance as poor Samana, later as a rich businessman, and finally as a wise ferryman.

His clothes and appearance as Samana reflect his quest for salvation through self-deprivation. Hesse, portrayed Siddhartha’s attempt to reach Nirvana as he shed his Brahman-cast cloths to join the pilgrims in the forest and become a holy man himself, and attain Atman. His readiness to physically emulate the teachings of the Buddha is glaring: “Siddhartha gave his garments to a poor Brahman in the street. He wore nothing more than the loincloth and the earth-coloured, unsown cloak. He ate only once a day, and never something cooked.” (Hesse 13). He willingly deprived himself of the pleasures of food as he fasted to the point that his face and body became visibly emaciated. His hair and nails grew long and were unkempt and full of dirt, defying vanity and superficial deceptions of the world. His scant attire reflects his state of spiritual resistance to all things worldly. In the cloths of a Samana, Siddhartha meditated and fasted away his lust for the female flesh. He became a humble student of righteousness and benevolent virtue. By transforming into a Samana and through the teachings of his most admired Gotama, he strived to end his souls suffering and reach enlightenment. Through his dedicated spiritual search as a pilgrim, in his old, torn loincloth, with bare, dusty feet, he concluded that the path to wisdom cannot be taught, even by the wisest teacher, but must be experienced instead.

Siddhartha resolved to immerse himself in Sansara by first adapting his physical appearance. His clothes reflect his grown love for earthly things: “Siddhartha had learned to trade, to use his power over people, to enjoy himself with a woman, he had learned to wear beautiful clothes, to give orders to servants, to bathe in perfumed waters. He had learned to eat tenderly and carefully prepared food, even fish, even meat and poultry, spices and sweets, and to drink wine, which causes sloth and forgetfulness.” (Hesse 75). He transformed from a dirty Samana of the forest to a groomed businessman, as if he was reborn to a new life cycle. He wore pretty, beautiful clothes, and pretty, fine shoes to satisfy the pretty courtesan Kamala. So Kamala, in turn, would satisfy the lustful passion of Siddhartha. His expensive garments, his combed and perfumed hair, exult the capacity to become anyone in a course of a lifetime; much like a stone can become anything in the course of eternity. Hesse, in this way, manifests the cyclic change of truth to deception, holy to sinful, salvation to suffering. His extended wandering of the world of the childlike people, in rich clothes and oily hair, left him in vacant despair. His rich cloths, his superficial possessions, did not bring him any closer to his path of self-discovery.

In his final incarnation, Siddhartha signified his transformation as a ferryman by asking to trade his wealthy attire for an old loincloth. The clothes that annoyed him, the clothes that represented his old self, the sinful self, the foolish self, were eagerly discarded. The river had spoken to him, and he was able to hear it. He had died and was reborn in the river. He was born with new knowledge. He had learned from the river that time is an illusion that life moves in cycles: “Not eternal is the world of appearances, not eternal, anything but eternal are our garments and the style of our hair, and our hair and bodies themselves.” (Hesse 92). After hearing the Om, Siddhartha wore a smile on his face and carried love in his heart. Love was no longer a weakness of the childlike people. In the final stage of his life as a ferryman, no reference is made to his carnal self, hinting his spiritual transcendence. Siddartha came to the conclusion that nothing is entirely holy or entirely sinful. Nothing is entirely Sansara or Nirvana. Similarly, his final robe is not entirely physical, because ethereal was also his final cloak of wisdom, weaved of joyfulness, adorned with love, stitched with the pain of love, embellished with wonderful foolishness, bearing the weight of love and suffering. In his new spiritual attire, Siddhartha celebrated the oneness of life, the balance between Sansara and Nirvana.

Also, Kamala’s transformation is manifested by her changing clothes and appearance. The courtesan with the intricate hairstyle, the elaborate makeup, the colorful clothes, with her arrogant and lustful manners, that all signify a woman in Sansara; all indicate a woman of the childlike people. This woman, goes through her own cycle of existence, to change into a mother, to become a pilgrim of Gotama. Her dull clothes, her loose hair, her calm face, all count for her transfiguration towards her own path of salvation. Thus Hesse’s descriptions of clothing and appearance distinctly signify the spiritual landmarks in Siddhartha’s story. In each lifecycle, the protagonist becomes a new person that physically manifests the spiritual change within the self, with visual signifiers of clothing and appearance. Siddhartha, through his transformations, becomes a learner and seeks to collect the wisdom of his transitory existence, as the bees harvest the honey.