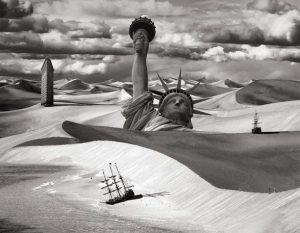 In the penal colony, Kafka sends out a dexterous invitation for a journey through his story, as a travelling researcher, by cleverly recruiting the limited omniscient third voice. His command is executed with military restraint, as he barricades all other characters, but the traveller, who he enlists to besiege the central role. Without surrendering entirely the inner workings of the traveler, Kafka provides tactical insight to his character, as well as, strategically catapults his thoughts and feelings.

Most of the interpretation with regard to the character of the traveller can be inferred directly from the narrative. The few descriptions dedicated to his nature, portray an honorable and decisive man: “He was basically an honest man, and he knew no fear. Even so, he hesitated for a moment… and then he said what he had to say: ‘No’.” (Kafka 171). Consistently, he is depicted as a man who has a clear opinion, but does not wish to interfere, nevertheless; adhering most suitably to the profile of a traveller, nothing more than a researcher. Despite his initial intentions to remain a bystander, he soon realizes that once he is on the island he cannot remain a mere spectator.

The weight of the central character is carried primarily by his own thoughts. Kafka devotes the greater part of his otherwise restrained portrayal of the traveller, to directly reveal his thoughts as they spur on the moment and drive the plot further. The protagonists insights, serve as navigation: “The fact that he had been asked to witness this execution even seemed to suggest that his opinion on this justice was being sought.” (Kafka 163). The directive purpose of his thinking aims to reflect on the reader, the mental route upon Kafka carefully maps out each maneuver in the story.

Feelings of injustice, disapproval, curiosity, and horror, associated with the execution of the judgment in the penal colony are predictable, and expected to arise; therefore Kafka did not invest on the traveller to animate them with any immediate urgency. On the contrary, he chose to transverse only the feelings that would secure an unexpected, yet controlled alliance with conflicting emotions of growing admiration towards the officer and his reverence to the vision of the previous commandant (Kafka 151). By revealing directly his hidden sentiments: “The traveller found himself warming to the machine a little” (Kafka 152), Kafka implants intentionally an emotional compass to which he controls the gravitational field.

In a stern voice, appropriately emitting the military scape, Kafka becomes the tour guide of the expedition to the penal colony. By appointing the traveller as the main character, he assigns an avatar to which he anchors a psychological journey through designated emotional sites. As such, the reader becomes a traveller of his own right, until the story drifts along the closing lines, sailing away from the thrilling island of the penal colony.