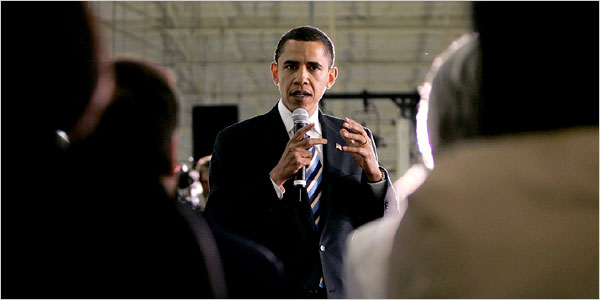 CAPE GIRARDEAU, Mo. — The contest with Senator Hillary Rodham Clinton not quite over and the one with Senator John McCain not quite under way, Senator Barack Obama is floating somewhere between the two major phases of his long campaign — a political limbo that brought him to this Republican hamlet on the
night of a West Virginia primary he was expected to lose.

The Democratic Party’s love affair with Barak Obama has hit a rough patch. Familiarity has not exactly bred contempt, but it is becoming increasingly obvious that the dew is off the rose and a lot of people don’t trust this guy as far as he can toss a bowling ball. Books will be written about the meteoric arc of the political career of Sen. Obama, but in the Big Book of Presidential History he is destined to be but a footnote.

We continue to maintain that the entire Obama candidacy, in fact his six-year ballistic rise from South Side obscurity, was a brilliantly devised plan by the Billary Brain Trust to create an extremely attractive but ultimately nonviable stalking horse to divert attention, support and funding from more (they thought) dangerous rivals.

For a variety of reasons this political science project went seriously out of control. For one, Barack proved elegant, graceful and silver-tongued to a degree almost forgotten in American politics, and completely novel to a majority of voters. Remember, 18-year-old first time voters in 1960 are 66 now. In addition, despite decades of spite and vitriol, the Clintons once again underestimated the depth of the visceral repugnance that Hillary inspires in a healthy segment of the population, including many in her own party. Finally, the millions of young Americans drawn into the political maelstrom for the first time during this election cycle are proving endearingly but frustratingly naive. They actually believe that the highfalutin rhetoric flowing from the B-man mean that he IS different from your average politician.

The sad truth is that Barack is one more in a long line of Democratic machine politicians, perhaps even more indebted to his corporate masters as a result of his seemingly miraculous ascendancy over pols with decades more experience and public servitude. The polished veneer starts to crack every time he has to play defense; the lofty phrases and sweet syntax evaporate and he becomes just another mealy-mouthed prevaricator trying to talk his way out of hot water.

Everybody but the Dowbrigade has already counted Hillary out, and that’s just the way she wants it. Contrary to popular belief, the protracted internecine warfare in the Democratic party is helping Hillary, the party and the American political system. How? Well, for Hillary, this kind of knock-down drag-out infighting is her bread and butter. She revels in the down and dirty of American politics, and in our opinion it’s about time the Dems got a candidate who knows how to land a good sucker punch in the clinch.

Whoever wins this thing is going to have to win it dirty, and in a no-holds-barred mud wrestling death match our money is on Hillary every time. Perhaps it is better for her that the Obama golem has run amok – after a rough blood sport matchup with Barack she will be even more ramped up than if she had emasculated him in a spring walk-over as originally planned. Kind of like the Red Sox beating the Yankees in the American League Championships and then blowing through the World Series.

Plus, the Democratic party benefits by the unceasing media spotlight focused on the race; McCain gets barely an obligatory mention on the evening news these days. Even when he does get some face time, he doesn’t know whom to attack. By keeping the situation up in the air as long as possible, the Dems present a moving target and confuse the enemy, like a football team that doesn’t know which opposing quarterback to prepare for.

Finally, the country benefits because, besides six months of gripping political drama, we are witnessing unprecedented engagement and activism by huge segments of the electorate who have been sitting on the sidelines for far too long, apathetic, disillusioned and convinced that nothing they do would have any effect on the way their country is run. Unfortunately, most of them are so starry eyed and gullible, not having had their eyes opened and their hearts ripped out by the likes of Teddy Kennedy, Thomas Eagleton, Gary Hart, Ross Perot, Michael Dukakis, Ralph Nader or Jerry Brown, that they are taking this newly repackaged Democratic shtick at face value.

Let’s hope these fools wake up before it’s too late. Let’s hope that Hillary’s feral nastiness and killer instinct discover a loose thread in the presumptive Emperor’s new clothes, because America needs a President who knows how to fight dirty. The world is indeed a Global Village these days, and its not a particularly nice neighborhood.

The bottom line is that Barack Obama is simply not ready for prime time. He has not been battle-tested, has not been in the line of fire, has not endured his trial by fire. He may one day face these trials and come out seasoned and secure, but leader of the free world is not the kind of gig you want someone working out the kinks in their act in.

Categorically renouncing a man he so recently referred to as his mentor and spiritual adviser indicates an individual in a major period of evolution and reorientation. As Groucho Marx famously said, “Those are my principles, and if you don’t like them… well, I have others.“

At least we know what Billary stands for…..