Our next update has 2 main components addressing the two constructed parts of our speaker: The mechanical elements, and the electrical elements.

As we continued to discuss our ideas for the housing of the speaker, we discovered that the thermoforming materials that we have access to are only applicable to fairly thin plastics. This would make it a more flimsy product than our original intended vision. In order to provide more structural support for the casing, we now plan to 3D print the back, rounded casing. We hope to begin manufacturing in the next few days. Updated CAD model images are included below. 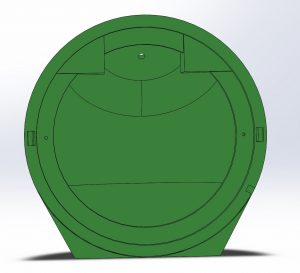 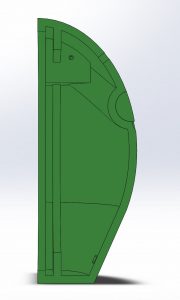 Figure 1 and 2: Layered protrusions from the body which support the handle axels and driver mount. 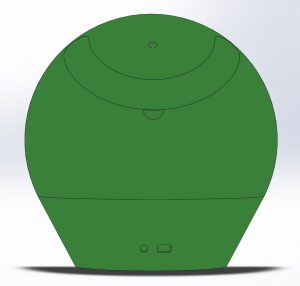 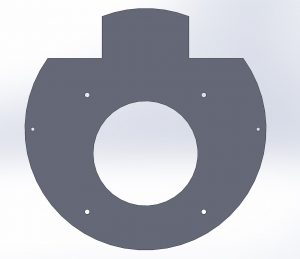 Figure 4: Driver mount with screw holes for driver and connection to casing. 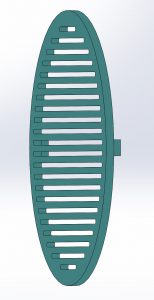 Figure 5: Driver mount with screw holes for driver and connection to casing. 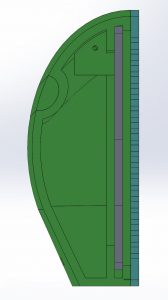 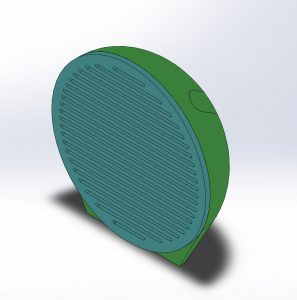 Below we have included the schematics for the electrical circuit to drive our speaker (thank you Jim!!). The general idea of the circuit is that there is a Li-Poly battery that gives us the Voltage needed to run the speaker. We then regulate the 5V down to about 4.2V. There are then 2 mirroring circuits that will affect volume control and amplify the sounds slightly. From there, we sum these two signals, and finally input them into a (NAME) chip which acts very similarly to a PWM (control?) which will “magically do the work for you!” -Jim. This output is then connected directly to our driver to produce the intended level of sound.

More specifically, here is a description of the circuit (as described by Jim):

This amp is designed to power a small speaker in a small enclosure, from a variety of sources, including headphone jacks and line outputs.  It features a rechargeable battery which is charged through a standard micro-USB connector.
The charger circuit is U2, in the lower left of the schematic.This chip is designed to take a 5V input from a USB cable and charge a lithium-ion battery to its maximum voltage of 4.2V.  The battery is connected to J2, to the right of U2.  The resulting power source can vary from 4.2V down to 3.5V or lower when the battery discharges.  That’s not a lot of voltage, so the rest of the components need to be specially chosen to run on lower voltage.  In particular, I needed to find a low-voltage operation amplifier, so I chose the LME49721
One of the problems with running off of batteries is that audio signals are both positive and negative with respect to ground, so you will see a lot of capacitors in the signal path, whose job is to allow me to shift the signals so they’re centered around a point halfway between Vcc, which is the battery’s voltage, and ground.  That’s the job of voltage divider R24-R25 on the left.

Stereo audio comes in on J3 in the upper left and gets attenuated by ganged potentiometers R10 and R18.  Putting the signals through potentiometers before going into op-amps is a way to allow the amp to work with large signals that would otherwise have caused the amps to clip.

The main job of U3A and U3B is to present a high input impedance to whatever is driving the amp, but they also add a bit of gain — a factor of two in the audio band.  We can adjust this gain by changing resistor values if needed, after listening to the speaker through your phones.

Once through U3, the left and right channels are summed together by inverting summer U4.  The output of U4 then goes to the magic digital speaker driver U6.
The SSM2305’s operation is similar to the PWM amplifier that Landon from Bose talked about, but it’s a bit more complicated than the PWM concept — it uses a technique called Sigma-Delta modulation.
SpeakerAmpBat1

Below is an image of our CAD model for our speaker. It is 8.5in x 8.5in and 3.2 inches deep. The thought process behind these dimensions was that we wanted it to be portable, while not miniature. We are bringing the boom box back. This also allows enough depth for most drivers that we will decide between to fit within the housing. 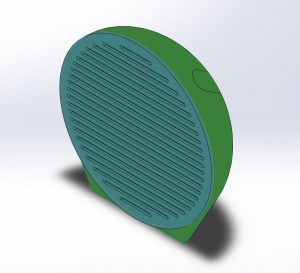 The materials we have chosen for our housing are mainly acrylic (for the front piece) and plastic to be thermoformed into the back casing. The reason we chose to thermoform is because it allows us to create the entire back half from a single piece of plastic using a simple mold to create our exact intended shape, and it is a lot faster than 3D printing the piece. The acrylic front allows us to shape it easily with laser cutting, and cut slots throughout the front. While the decisions we have made for these materials are mainly focused on manufacturing considerations, we are not worried about their affect on the sound. We plan to fill the inside of the casing with a foam material to reduce the sound waves reflected off of the casing itself.

Below is also an image of our intended circuit within the housing unit. This may change as we determine the driver we plan to use, but we will update this page as our design changes. We also have a list of the components and connections shown. 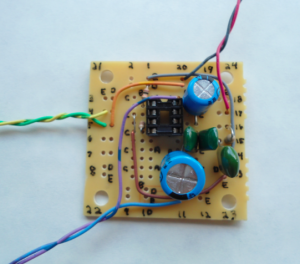 Introduction:
Welcome to our ES25 Final Project Site! We are excited to learn about designing and building a speaker and hope you enjoy the process of our work. We specifically aim to explore speaker casing design with the ultimate goal of finding out how far we can creatively push current speakers from an industrial design point of view. Here we will include weekly updates on our progress, design decisions, and problems that we face along the way.
Project Description:
We plan to build a working speaker, housed in a mechanical structure we design and fabricate ourselves. We will soon include a CAD mockup of what this will look like, which will shape the electrical components we choose to buy. Our speaker is inspired by the boomboxes of the late 1990s and takes geometric inspiration from appliances from the 1950’s. Based on our current vision, our speaker will consist of an acrylic front plate slotted with holes through which the sound is emitted. The back of the housing will be a rounded, thermal formed plastic casing. Within this casing, we will solder circuitry to connect speaker driver to a jack to plug in a phone. Once we get this to work, we will be able to analyze how this given geometry affects the sound from the speaker, and learn about geometries that will optimize the sound.
Motivation:
We chose to explore this specific aspect of speakers because we are both mechanical engineering students interested in product design. In a class combining music and engineering, we knew that we wanted to build something physical, and a speaker seemed like an exciting challenge. While we could have attempted to experiment with the electrical components of the speaker, many of the tutorials and how-tos we found online recommended strongly against doing so since the technology surrounding the electrical components is so complex and would require intense studying. More importantly, this project will allow us to gain real design experience as well as manufacturing skills to bring our design to life. These challenges and opportunities are what drove us to choose this project.
Background Research (how have similar problems been solved by others?):