This post is the first in a series about the Stuart Cary Welch Islamic and South Asian Photograph Collection written by the project’s staff and student catalogers in the Digital Images and Slides Collections of the Fine Arts Library.

In the basement of Lamont Library, a little-known collection is poised to make big contributions to the field of art history. Behind the neatly stacked boxes of microfilm reels and shelves of government documents lining the library’s D-level, a small, tucked-away office provides access to some of the world’s most treasured artworks. Beginning in May of 2017, Lamont’s Room D-10 was transformed to accommodate a collection of over 60,000 35mm slide images of Islamic and Indian art. The collection totals enough to fit 60 small moving boxes and previously belonged to the eminent 20th century scholar Stuart Cary Welch. Cary Welch’s slides were donated to Harvard as part of his estate in 2014, and now a team of students and library staff are working together to unveil this hidden legacy to a larger global audience. 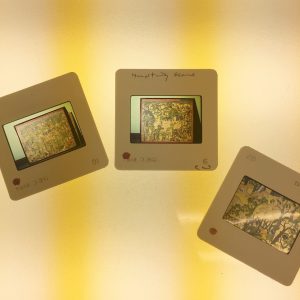 This post inaugurates a new blog series written by the Welch project’s staff and student catalogers. Posts will contextualize how such a unique corpus of images made its way to the Harvard Fine Arts Library and will provide insight into what it’s like to prepare 65,000 slides for a new virtual existence online. To date, upwards of 10,000 Welch slides have already been scanned and published as digital images free to browse and download on Artstor.

But before we start taking a behind-the-scenes look at this process, it’s important to shed some light on the project’s raison d’être: Stuart Cary Welch himself. Known for his role as a curator at both the Metropolitan Museum of Art (from 1979-1987) and Harvard’s Fogg Museum (from 1956-1995), Cary Welch was one of the first art historians in the United States to promote the study of Islamic and Indian art. In his own words:

“Because no courses in Persian or Indian painting were given at Harvard (or elsewhere) during the 1950s, my path to knowledge was autodidactive, through travel and study of collections. This enjoyable program was catalyzed by building an archive of 35mm Kodachrome slides, oddly an innovative practice at that time.”[1] 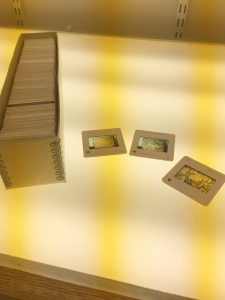 It may or may not have come as a surprise to Welch, then, that his ‘innovative practice’ would become internationally mainstream over the next few decades. During the second half of the 20th century, university art history departments adopted the use of slides as a pedagogical tool. When digital media replaced analog image technology in the 1990s, these pre-information age collections started to take on new didactic roles beyond the classroom. So what exactly are 35mm slides, how were they used, and why are they important today? Our next post will more closely examine this fascinating film format.