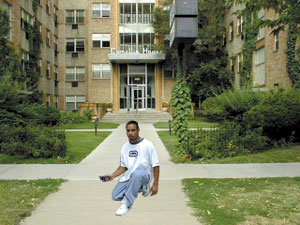 The University of Chicago’s Joshua Correll has created a basic first-person shooter to advance his research into how race influences life-and-death decisions like a policeman’s decision to shoot a potentially threatening subject. (Thanks to Nicholas Kristof for spreading the word).

That’s it. Cold, hard evidence that I am, as Avenue Q puts it, “a little bit racist“: I shot armed black men 21 ms faster than armed white men, and holstered my gun 73 ms faster for unarmed white than black men. For whatever reason, the game didn’t report back on my false positives, though I think the one person I’d shot incorrectly was black. And this is despite my going in knowing exactly what this game was intending to demonstrate!

While I’m not qualified to delve into the psychology of this test/game, I am — as with the Door Game — curious about whether and how this game creates consequence out of choice, and then in turn offers a moment of reflection on that choice. What kind of additional framing would exploit that teachable moment — maybe, at a minimum, the ability to post a comment after seeing your results? Compare your results with others’?

Finally, I also wonder whether this mini-game (I hesitate to call it a “casual game”) can become part of a fuller game experience. Like, maybe, a special level in S.W.A.T. V?