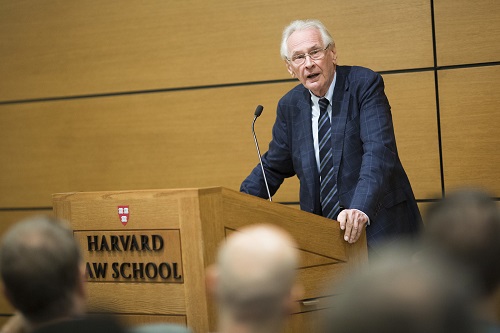 Dieter Grimm LL.M. ’65, a former justice of the Federal Constitutional Court of Germany, returned to Harvard Law School on September 18 to speak on “Courts under Political Pressure.”

Justice Grimm served as a justice on the Federal Constitutional Court of Germany from 1987 to 1999. He is a permanent fellow and former rector at the Wissenschaftskolleg zu Berlin Institute for Advanced Study, and a professor emeritus of law at Humboldt University of Berlin. Grimm has been a visiting professor at HLS and at universities around the world. His recent publications include Constitutionalism: Past, Present, and Future (Oxford University Press, 2016) and Sovereignty: The Origin and Future of a Political Concept (Columbia University Press, 2015). An honorary member of the American Academy of Arts and Sciences, he holds a law degree from the University of Frankfurt and an LL.M. from Harvard Law School.