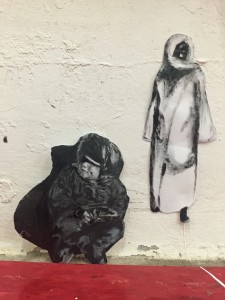 Week 4: Prophet Muhammad as Paradigm, the Mi‘rāj, and Poetry in Praise of the Prophet

Medium: Black Ink on Paper superimposed on a wall

The Prophet Muhammad is God’s beloved, or habib Allah. Muslims all over the world have such respect and love for their Prophet that they honor him by following his traditions and way of life, or his sunnah. They celebrate this love creatively through artistic forms such as poetry and art. I chose to create a scene using ink that celebrated the uniqueness of Muhammad as a prophet. It is commonly known that Muhammad was an orphan, and though he was cared for by his extended family, this reality shaped Muhammad’s preachings and values profoundly. Though piety is stressed, there is an overarching theme in his teachings that emphasizes the ideal of social justice. Muhammad himself was a pioneer of social justice during his time. He encouraged giving alms to the poor and taking care of the orphans, and stressed that aiding the needy is just as important, if not more important than worshipping God through prayer.

I had taken a picture of a little orphaned girl begging on the streets during a harsh winter in Kabul, Afghanistan and used this as a template for my painting. The little girl can be seen leaning against a wall bundled in many layers as she looks to the side, anxious in the cold. Hovering above her is the image of the Senegalese religious leader: Amadou Bamba. One cannot be quite sure if his image is hovering above the girl like an angel, or painted by a human being onto the wall. Either way, his presence holds significance for the little girl because he is the only other subject in the scene, symbolizing how the rest of the world has abandoned her, and so she now only has the painted memory of Amadou Bamba to give her barakat (blessings). The irony of this situation is that though people give money to beggars hoping to get their barakat, it is the beggars who are in greater need of God’s material blessings. When the Prophet passed away, he left the people who needed him the most: the poor, the wanderers, the orphans. The Senegalese think that some of the Prophet’s goodness is found in others, and that Amadou Bamba is one of those people, left in charge to take over the Prophet’s work. The orphan girl does not know that Amadou Bamba is there to look after her and give his blessings because even though he is hovering above her left shoulder, she is looking over her right shoulder for help. This, too, reflects the idea that God’s blessings are there, even if you might not see them at the time.

The message of this piece is that if one loves their Prophet, then surely they must love all of the Prophet’s children, the orphans.