HomeLean Media: Out next month!

Five years ago on this blog, I wrote a post titled A proposal for a Lean Media Framework: Input and iteration required. Having heard Eric Ries’ talk about Lean Startup, I wondered whether some of these ideas could be applied to media works, such as a film, video game, website, or music. Little did I know that this conceptual nugget would grow to something much larger. I wrote:

I believe there is an opportunity to build a new Lean framework that is specific to media ventures — a Lean “mod” for media, if you will. The goal of building a Lean Media Framework is to help startups and established companies build innovative products, platforms, and business models that have a higher chance of success and can contribute to new models of creation, distribution, and consumption.

I saw the opportunity, looked for examples from across the world of media, and listened to you, my audience. I then developed a framework, and tested it out on some of the media projects I am engaged in. 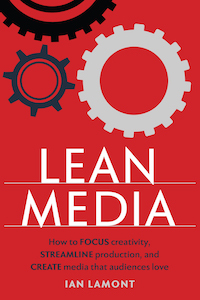 But it needed to be more than a series of blog posts. The result is Lean Media: How to focus creativity, streamline production, and create media that audiences love. The book comes out September 12, and I’m hoping that it can serve as a model for creators and media ventures which are interested in streamlining their operations and making media that truly resonates with audiences.

The book itself was developed using Lean Media principles. In addition to feedback to blog posts here and elsewhere, I had a test pod of readers who read the entire manuscript and offered generalized and specific feedback. I also sought feedback on the cover design from people on Facebook and the Kboards discussion forum — this input steered me away from what I personally thought was best, to concepts that had a broader appeal to people who create media.

The book has already received an endorsement from Automattic’s John Maeda, but over the coming months what I will really be looking for is reactions from readers — not only to validate the ideas and spread the word about Lean Media, but also to provide input to evolve the Lean Media framework further.

If you are a creator of media destined for public audiences, consider how the Lean Media framework might help. It’s easy to try on a couple of pilot projects (for instance, designing an album cover or for an online article) and then if it works, to scale it higher.

Thanks for your support!