Developer Robert Korff and his company Mark Development couldn’t have asked for a more helpful boost from the Newton Tab in the article titled, “Some concerned over short timeframe of Riverside visioning process,” published online on December 28.

In addition to publishing verbatim developer Korff’s Riverside PR spin points, the Tab failed to question some extremely dubious claims. “The Riverside development could be the economic engine for the city of Newton, but it’s going to require the density that we’re proposing,” he told the paper.

Economic engine of the city? What he’s proposing sounds more like a profit engine for Korff, with no additional benefits for Newton — in fact, it comes with significant costs, as I will shortly explain. And why were there no questions about his intention to rip up a signed deal he and his partners already have to develop the parking lot area at the Riverside MBTA station in Auburndale?

Let’s be clear about what’s happening here, since the Newton Tab wasn’t. In 2013, Korff’s business partner BH Normandy was granted approval to build a 580,000 square foot development at Riverside that includes more than two hundred new housing units. This deal came after six years of negotiations and lobbying with neighbors, local politicians, and city planning officials.

Now developer Korff and partner Normandy want to rip up the 2013 agreement, and force through approval for a far larger development that’s 1.5 million square feet in size, contains two 200+ foot tall towers with mostly “market rate”/luxury housing, and is only reachable by Grove Street, a narrow road connecting Auburndale and Newton Lower Falls.

Why are the developers trying to ram its new proposal through now? It apparently relates to the fact that Newton city council elections are taking place in November 2019, which would require them to start the application and lobbying processes all over again — possibly with a new slate of councilors voted into office based on their stances on the waves of oversized luxury development taking place in northern villages – Auburndale, West Newton, Newtonville, and the Lake – and other parts of the city targeted by developers, such as Newton Upper Falls.

Developer Korff is orchestrating a PR campaign in the pages of local media, in “fireside chats” with neighbors, and PR street teams going door-to-door in Auburndale and Lower Falls that aims to grant himself and his business partners hundreds of millions of dollars in additional property rights. We don’t know what the exact figure will be, as this is surely a starting point that will be ‘reluctantly’ scaled back to something that still grants him a huge payout. He’s done it before — check out his tactics with the Orr block in Newtonville, which included using the threat of 40B and having the Newton-Needham Chamber of Commerce criticize skeptical councilors and community groups on his behalf.

His new plans for the MBTA Riverside development represent an aggressive land grab that would come at the expense of Newton residents, who would be forced to shoulder massive costs relating to schools, traffic, infrastructure, and parking. Meanwhile, there’s nothing in developer Korff’s PR points about affordable housing, housing for seniors, or housing for middle class families, as shown in the flyer his PR team dropped off at my house last month (see below).

The impact would be especially hard on residents of Newton Lower Falls and Auburndale, who thought the Riverside deal was settled five years ago but have since learned the negotiation was merely a preamble to yet more aggressive demands from developers. No one cares about preserving an MBTA parking lot, but there’s already a signed deal that developers, residents, and politicians agreed to. Developer Korff’s attempt to renege on it should be shot down not only on principle, but also to avoid setting a precedent for other real estate deals signed by Korff and other developers throughout Newton.

If you are a Newton resident, please contact all ward councilors TODAY (EASY WAY: Email everyone at once by using this email address: citycouncil@newtonma.gov) and let them know what you think about the Riverside development. Even if you don’t live in Auburndale or Newton Lower Falls, your taxes will end up paying for developers’ profits through increased road, school, infrastructure, and other costs. The developers’ tactics to rip up a signed agreement also sets a precedent for similar tricks in the future all over Newton, including Washington Street, Newton Upper Falls, Newtonville, and elsewhere.

The misleading flyer handed out by MBTA Riverside developers. The actual size of the proposed development is 1.5 million square feet, not 547,000 square feet. The “new neighborhood” phrase suggests this is intended as a luxury enclave, distinct from the existing village structure of Newton. 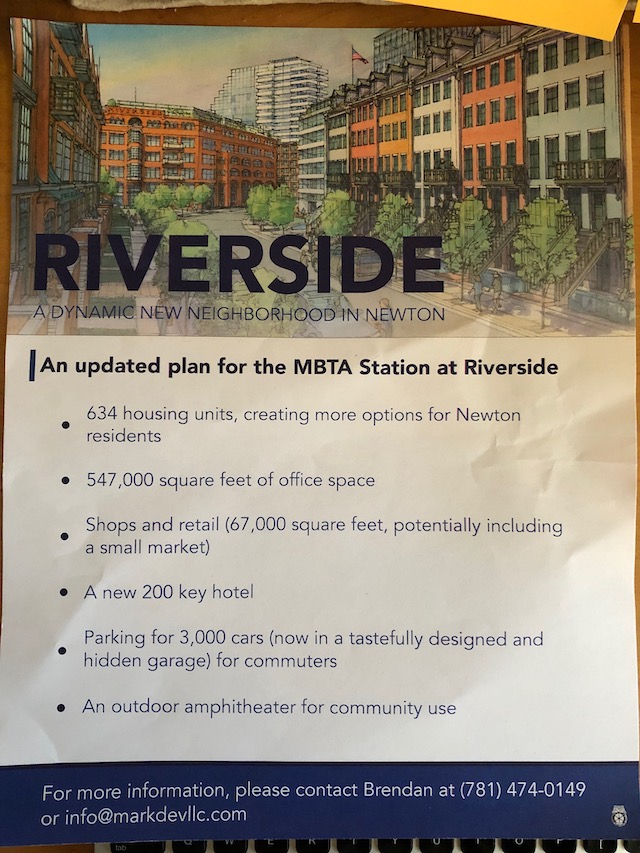