Years ago on this blog I posted some thoughts about the terrible sexual abuse scandal that the Fessenden School in Newton, Massachusetts, was forced to reveal.

I didn’t expect it, but that post became a catalyst for dozens of victims to come out of the shadows and share their painful experiences while students at Fessenden. One of the accounts left by a former Fessenden student was particularly heartbreaking:

… The worst of the several sexual abuses was the violent sexual attack carried out on by [former Fessenden teacher Claude] Hasbrouck. I won’t go into detail. But I had had enough. I left during a snow storm and walked the 8 miles into Boston. During that walk I had a psychic break. I cried, a raged, I came to the realization that I could not trust those who were meant to help mold, nurture and protect me. The adults and the authoritarians in my life could not be trusted. They had betrayed, abandon and abused me.

From that day on I became oppositional, Defiant, rebellious and non trusting of other humans. I was moved two more boarding schools where I refused to toe the line and was expelled from both. I ran away from home at 16, never went back and have been running from the pain and shame most of my life, whether it be geographically or by self medicating with drugs or alcohol. I guess I am luckier that a few Fessy alumni who OD’d or committed suicide. The total cost of the illicit drugs I ingested to numb the shame and pain, the rehabs, the psychologists, psychiatrists, the antidepressants is incalculable.

Gratefully I have been drug free for 16 years, but since 1963 the harm done by the pedophiles and sadists at Fessenden still lingers.

The author of that account, Adrian Hooper, passed away last month. He was in his late 60s.

I never met Adrian in person, but over a period of five years had many conversations via email. A group of us became united in our mission to bring justice to the victims, and force a full investigation of the horrors inflicted upon students by certain faculty members and school officers and covered up by successive headmasters, boards, and administrations. I can’t imagine how hard it must have been for Adrian to acknowledge his abuse in public, but I also can’t imagine how difficult it must have been to keep his secret bottled up inside for so many years. 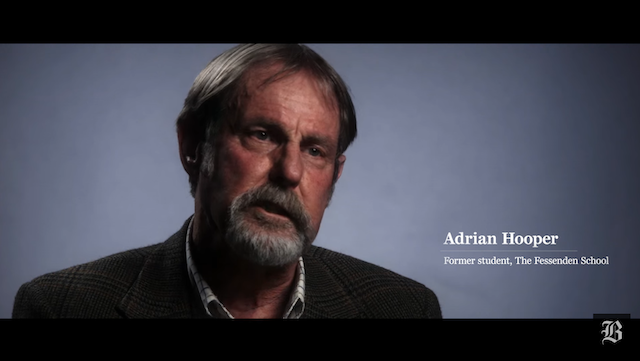 After connecting with other victims and a lawyer specializing in institutional abuse cases, he settled with Fessenden a few years ago. He told us how hard it was to dredge up those specific memories when talking with his attorney and later with the Boston Globe Spotlight investigative team. At the same time, I think the settlement served as recognition of what Fessenden had done to him (something that he didn’t get when he was young) and the process of meeting and learning other survivors gave some reassurance that he wasn’t alone. Was he able to achieve a certain degree of closure about what had been inflicted upon him at the Fessenden School? I certainly hope so.

Via his Facebook and Instagram feeds, I was able to learn about the other side of his life — his lovely family, the beautiful sailboats he crewed or followed as a young man, and his new home on the Florida Gulf Coast. He loved being near the sea, gardening, and the family dog. He treasured his wife and the time they were able to spend together. He also talked about his efforts to help others cope with addiction and recovery through a network of treatment centers that he co-founded.

In short, it seemed that Adrian was able to get himself to a good place in life after the trauma he suffered and the torment that followed. His untimely passing came as a sad shock.

Adrian, whenever I pass by the Fessenden School, I will think of you.

Whenever I see a boy trudging alone through the snow as dusk approaches, I will think of you.

Whenever I see a wooden racing yacht cutting through the distant waves, sails billowing as they catch the gusting wind, I will think of you.

Rest in peace, my friend.