I’d never thought I’d see this happen: Washington-style corporate donations sleazing their way into Newton’s grassroots democratic processes. The Northland Investment Corporation’s approach to getting its way on Needham Street in Upper Falls sets a terrible precedent for all future elections in Newton, in which winners may be decided by which side (or which candidate) has the biggest corporate sponsor.

Signs that something amiss in Newton came in the mail starting in January. Thousands of local residents have been sent multiple copies of glossy fliers like this one: 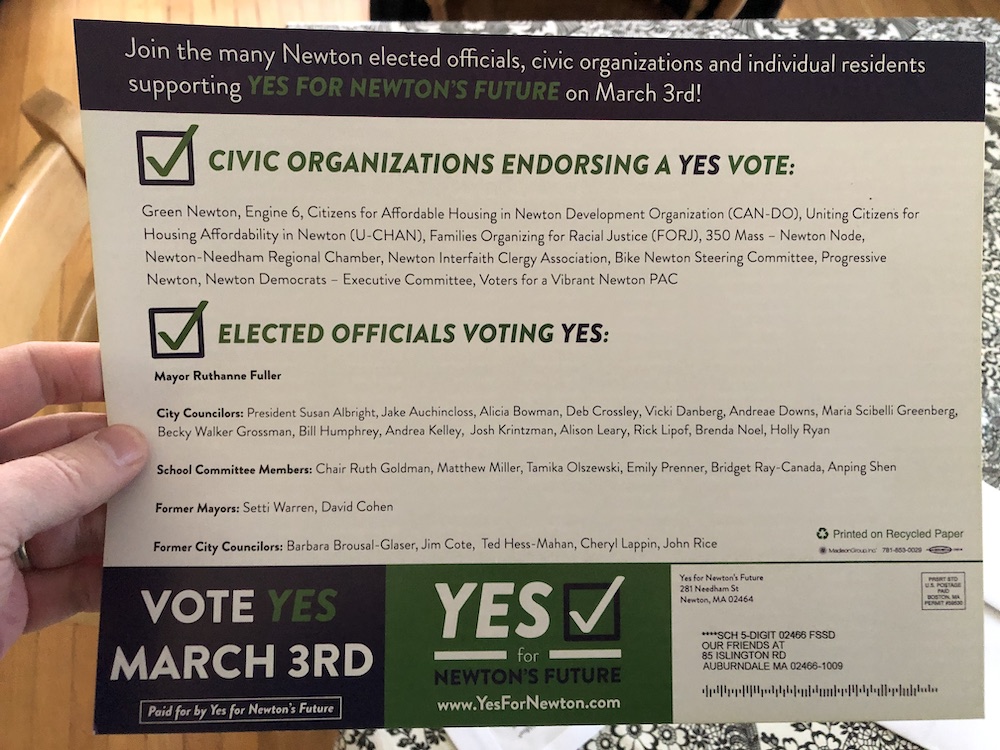 There have also been sizable ads in the Newton Tab and on social media. My wife even received a text message urging her to vote yes to support Northland Investment Corporation’s proposed luxury development on Needham Street.

Our home received a half-dozen such fliers. I am a publisher, and know that full-color mailers printed on glossy card stock are not cheap. I wondered how “Yes for Newton’s future,” the ostensibly grassroots group supporting the developer’s vision, was able to pay for all of that printing. Could the group have that many ordinary citizens mailing in checks?

It must be noted that Northland Investment Corporation does not have a good record of behaving like a friendly corporate neighbor. According to media reports, it played dirty — real dirty — in another real estate deal where outsized profits were on the table.

In 2008, Northland purchased a 301-unit development in New Haven. By 2016, Northland had managed the property so badly it was condemned by both HUD & the city. HUD inspections of the Northland-managed housing found 1,015 health & safety violations. More than half were life-threatening violations, including broken smoke detectors.

In a lawsuit filed on behalf of residents, a Yale expert found that poor conditions at the Northland-managed property in New Haven led to asthma in nearly half of children living there.

How could any company in good conscience do something like this to ordinary people living in the units it controlled? According to the lawsuit, Northland Investment Corporation deliberately carried out “demolition by neglect” of the property with the goal of razing the site and turning it into a profitable venture.

In a way, it should come as no surprise that Northland Investment Corporation is demanding special rights to build 800 units — most of them luxury apartments — on an old industrial parcel adjacent to an already overcrowded Needham Street. Just as in New Haven, outsized profits are at stake. If a $320,000 corporate cash injection translates into enough “Yes” votes, Northland Investment Corporation stands to make tens of millions of dollars in additional profit on its Needham Street plans. Maybe even more.

The ROI for Northland will be off the charts. The damage to Newton’s democracy will be irreparable.