HomeWhy does someone in Newton’s Public Buildings Division want to be my Facebook friend? (updated)

In the middle of the summer, a strange thing happened. Someone in Newton’s Public Buildings Division sent me a Facebook friend request.

I get friend requests from time to time from people I don’t know, but this was suspicious, as the same person had recently started relentlessly spamming practically every community Facebook group across the city, including Auburndale Village, Newton Community, and the Newton Civic Action forum. The posts were trumpeting public announcements from the Mayor’s Office about various public works projects, such as this one: 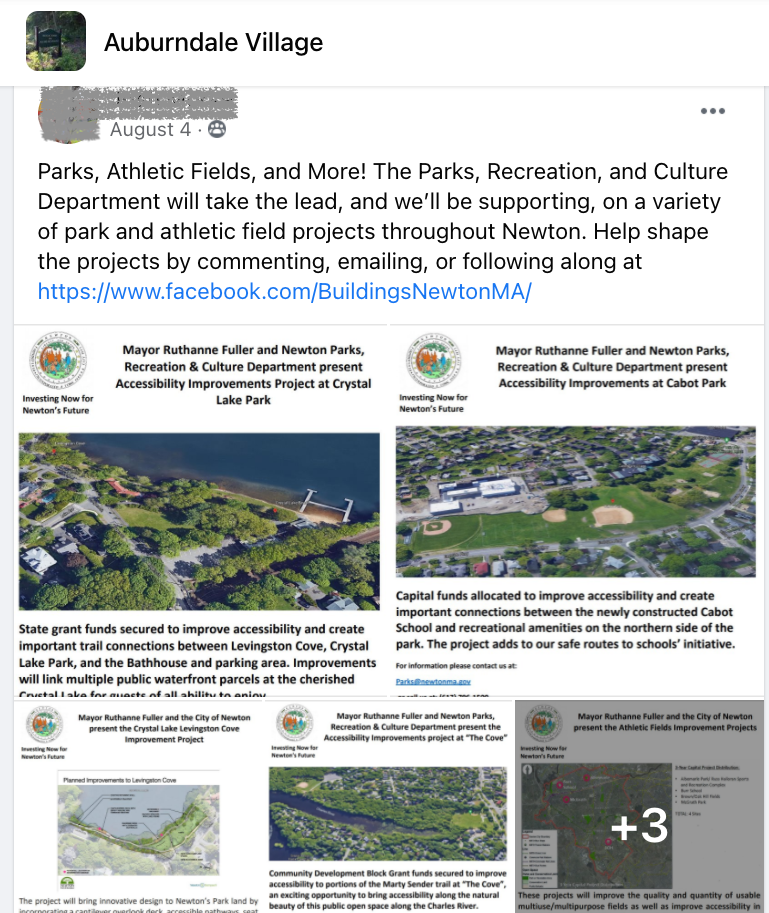 This post was immediately shared or cross-posted on other Facebook groups, including People who grew up in West Newton and Newton Parents.

Looking at the Newton Community Facebook group, the posts by the same Public Buildings Division employee commenced on July 22 (Gath Pool). It was followed by similar posts relating to these projects:

Many of these were cross-posted in other more local Newton Facebook groups, along with other positive announcements. I don’t know if they also appeared on Nextdoor or other local forums (comments welcome below, if you know the answer).

In addition to the municipal employee, one other city official has also been very active on electronic media, too. I have subscribed to Mayor Ruthanne Fuller’s weekly newsletter for years, but a funny thing happened around the same time the Public Buildings employee began touting all of the great news from the Mayor’s Office. On July 21, the day before the Public Buildings Division employee started excitedly posting on Newton’s Facebook groups, the mayor sent five newsletters in less than five hours:

It’s no coincidence that Fuller and one of her employees started sending out so many messages at the same time.

The first one – “Welcome to the Interactive Newton Network” gives a clue as to what’s going on (emphasis mine):

We know people are hungry for information about what is going on in our neighborhoods, villages and across our City. We in City government are also eager to hear from all of you. City projects are always better when we listen carefully to the people who live and work in Newton and shape the projects accordingly.

To that end, welcome to the INN, an interactive map that allows you to focus in on your neighborhood or any place of interest across the City and see what improvements and investments are in the works.

The mayor, a Chestnut Hill resident, has been hammered for years by complaints that she doesn’t listen, particularly from residents of northside wards disproportionately affected by development plans, including Newton Corner, the Lake, Newtonville, West Newton, and Auburndale. For instance, she was put on the defensive on this point in the past, as the Newton Tab reported in 2019:

“We are listening,” Newton Mayor Ruthanne Fuller said in response to questions about whether the community’s feedback will be taken seriously. “We all care desperately about Newton. We care about this site. I, too, want the right size here,” referring to the green “RightSize Riverside” stickers distributed by the Lower Falls Improvement Association’s Riverside Committee.

I’ve also criticized the mayor on this blog for putting on a charade of listening and then doing pretty much what she, her consultants, and luxury housing developers seek to have built:

Another side of this trend is the tactics used by some of our own elected officials and the city planning department to steamroll opposition and discussion. A few years back, it was holding neighborhood feedback sessions (“Hello Washington Street“) in which the mayor, planning department officials, and highly paid consultants made a big show of listening to local residents in West Newton and Newtonville about the plans. After the sessions were over, they promptly turned around proceeded to ram through the high-density plan that they and big developers wanted all along.

Then there’s the issue of the Fuller administration not even bothering with “stakeholder input,” as local businesses in West Newton and Newtonville discovered last fall when hundreds of parking spaces along Washington Street suddenly disappeared to make way for bike lanes. Even the Newton-Needham Chamber of Commerce, which has loved having the mayor on its side when it comes to high-density luxury development in Newton, was surprised:

But the Fuller administration claimed that it didn’t need to “go through the stakeholder process” because the project was temporary. It was forced to backpedal owing to the outcry.

Keep in mind that the flood of social media posts this summer from the Public Buildings Division employee haven’t just been about listening, they’ve also been shouting to the rafters the accomplishments of the Fuller administration:

“We’re hard at work with our design team, friends from Newton Public Schools, City Council, and parent community to deliver a wonderful project for the Lincoln-Eliot School.”

“It was a beautiful morning as we set the new temporary pedestrian and bicycle bridge at Albemarle in place.”

Regardless of the posts’ contents, the longstanding concerns about Fuller’s listening habits kind of makes one wonder why INN, the coordinated social media press releases, and Facebook friend requests didn’t get going years ago. Why did the communications frenzy start in July?

Maybe it has something to do with this announcement on June 16 that Fuller has a serious contender (former Auburndale city councilor Amy Mah Sangiolo) in the Newton mayoral race this November?

I read through the Massachusetts State Ethics Commission Advisory 11-1: Public Employee Political Activity and did not see how a flood of positive social media posts about city business by a Newton municipal employee reporting to the mayor running for reelection would constitute an ethics violation.

But it still doesn’t feel right.

Update: The election is over, Fuller won, and as if by magic the Facebook spam from this Newton employee have largely disappeared.