The mayoral election in my hometown is coming up November 2, and in the final weeks of the campaign incumbent Newton Mayor and Chestnut Hill resident Ruthanne Fuller is using the tools at her disposal to gain an edge over her opponent, former Newton City Councilor and Auburndale resident Amy Mah Sangiolo. [Update: Fuller won and her success at getting big donations from outside of Newton undoubtedly helped].

A few weeks ago, I wrote about the flood of newsletters from Mayor Fuller’s office, which were accompanied by a flurry of positive social media announcements and Facebook friend requests from Newton’s Public Buildings Division. The online communications onslaught was ostensibly part of a “listening” exercise, but to me looked more like a stealth PR campaign launched in the wake of Sangiolo filing her papers to run for mayor in June. This week, I wanted to explore another effective tool in the Newton mayoral election: Money.

In late August, I pulled 2021 data from the Massachusetts Office of Campaign and Political Finance for the three declared candidates for Newton mayor. One of them, Al Cecchinelli, lost in the September preliminary race, and had only a handful of contributions. By August 23, Sangiolo had two months of active campaign fundraising and 196 donations – not bad, considering Mayor Fuller (246 donations in 2021, plus additional donations in 2020) had a huge head start. Here’s how 2021 donations looked for both on August 23, segmented by donation size and total value: 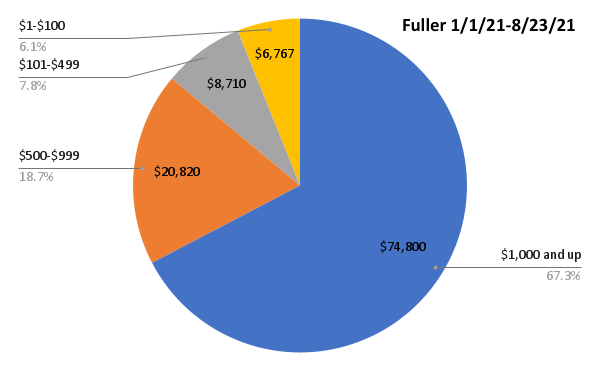 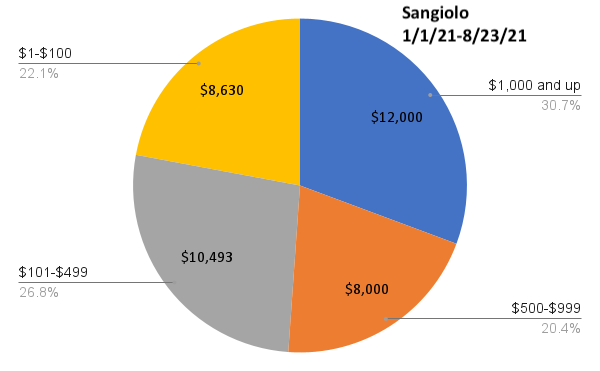 Here’s the breakdown by number of donations: 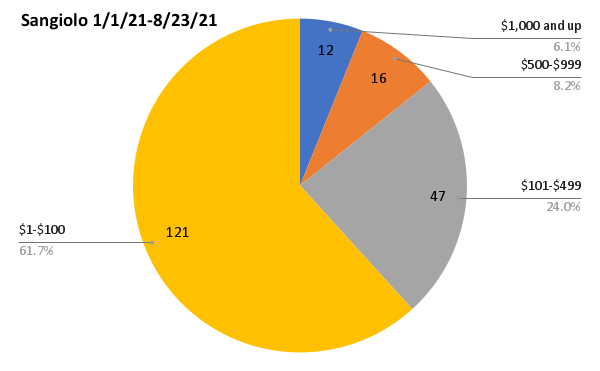 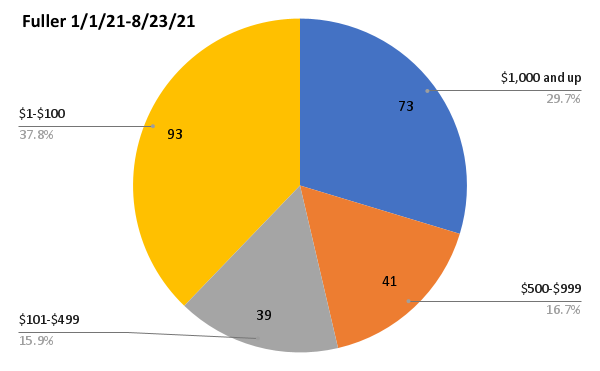 Campaign donations from outside Newton

Almost all of Sangiolo’s campaign donors resided in Newton. Only one of her twelve $1,000 donors was from outside Newton.

By comparison, of the 73 $1000+ contributions to Fuller’s campaign by August 23, 31 Fuller donors (43%) were not from Newton, with about 1/2 that number (15 donors) listing out-of-state addresses. If all of Fuller’s non-Newton campaign donations in the OCPF list are tallied, including smaller donations from elsewhere in Massachusetts and beyond, they are greater than what Sangiolo received for the entire period ($40,125 vs $39,123).

(Notes about the data: 2021 data includes donations recorded between January 1 and August 23, even if the contributions were marked as 2020 donations. In addition, there was a $2800 amount on Fuller’s list from Nationbuilder in Los Angeles in July which was listed as a “non contribution” in the OCPF data. Nationbuilder appears to be associated with a software application for processing donations).

Regardless, we’ve already begun to see the impact of Fuller’s fundraising success. Our household has received three flyers from the Fuller campaign since late August, but only one brochure from Sangiolo. Mailings and other paid publicity can have a huge impact on elections, as we saw with the Northland referendum, which was decided in favor of Northland Development Corporation after the developer dumped more than $300,000 into the campaign (see “As sole donor of the “Yes” campaign, Northland’s deep pockets try to steamroll Newton’s democracy“).

Back to the mayoral election in Newton. Why are the patterns of donations so different?

Name recognition has certainly played a part. As mayor, Fuller is known across the city, whereas Sangiolo’s name recognition is more concentrated in north Newton, including her home village of Auburndale. Personal and professional networks play a role as well.

But another way of looking at the Newton’s mayoral race: Donors are aligning with the candidates who represent their values. Wealthy donors gravitate to Mayor Fuller. Donors of more modest means gravitate to Sangiolo.

For instance, in the OCPF report, I am one of the 121 small donors in the $1-$100 contributions to Sangiolo.

She aligns with my values.

For instance: I agree with Sangiolo’s campaign regarding zoning and development in Newton:

I have quite a bit of experience with zoning and development in Newton, having served on the Newton City Council for 20 years — including 18 years on the Zoning and Planning Committee and 2 years on the Land Use Committee. I believe that our City’s current work on zoning needs a fresh focus to better reflect what residents want.

First, I do not support the elimination of single-family zoning. I believe we need a diversity of zoning districts throughout our city to meet the needs of all who want to call Newton home.

Eliminating single-family zoning without adding strict dimensional controls will not make Newton affordable. We can see by the existing multi-family zones throughout the City that developers are tearing down modest-sized homes by-right and replacing them with out-of-scale units selling for over $1 million each. This does not improve affordability.

I’ve written about this very issue for years on this blog. Teardowns of modest middle-class homes and apartments to make way for McMansions, million-dollar condos, and luxury apartments is a chronic problem in Newton, especially in the north-side villages. Very few politicians are willing to truly stand up to developers. Sangiolo, when she was councilor, actually did try to introduce a teardown moratorium in 2014 but was rebuffed by other councilors and then Mayor Setti Warren:

“I’m trying to jumpstart something; make something happen. Development is a real issue. I just want to get something done.”

By contrast, Mayor Fuller (and before that, Ward 7 Alderman Fuller) has been a reliable supporter of zoning reform to encourage high-density “market rate” housing as well as giant luxury developments like Trio in Newtonville, Riverside in Auburndale, Northland in Newton Upper Falls, and 28 Austin Street in Newtonville. These projects are multimillion-dollar ATMs for the developers who build them, with the mayor and allied Newton city councilors – many of them from distant southside wards – ensuring that developers’ demands are met.

Case in point: the 99-year lease granted to the 28 Austin Street developers Dinosaur Capital for just $1,050,000. (Update: Meryl Kessler, the spouse of the developer behind 28 Austin Street, is running for a Ward 3 councilor-at-large seat, currently occupied by Andrea Kelley and Pam Wright. Kessler’s platform includes “revitalizing Newton’s village centers”) Or, Mark Development being allowed to repeatedly rip up signed agreements by claiming they’re not making enough money – with the acquiescence of Mayor Fuller, who said in the October 14 mayoral debate that she doesn’t want to “push a developer away” so projects “become uneconomic.”

In other words, no attempt is made to verify developer claims about profitability. With the precedent set by Riverside, developers know all they need to do is claim poverty to get Fuller and many southside Newton city councilors in Wards 6, 7 and 8 to agree to their demands for even more luxury units.

Sangiolo has also taken issue with the mayor on schools, noting that Fuller “fails to elicit input” from stakeholders when it comes to Newton’s schools:

This is yet another example of the mayor’s “listening” problems. In some cases she and her administration merely pretend to listen to residents. In others, they don’t even bother.

And not just about schools. It’s about development. Roads. Public buildings. How many times have we seen Fuller’s administration plow forward with some project, then backpedal after outcry from residents and groups who were ignored or never even consulted?

This especially seems to happen on the north side of town. There was the aborted 2019 plan to place NewCAL in Albemarle, rescinded after sustained pushback. In 2020, the city unilaterally eliminated hundreds of parking spaces along Washington Street to make way for bike lanes. The many small businesses along the route came to work one morning to discover parking spots for employees and customers were no longer there. They were flabbergasted, to put it mildly. The response from the city was classic – we don’t need to listen!

“City officials said the project was always meant to be temporary, and thus doesn’t need to go through the stakeholder process.”

As for development, Mayor Fuller is good at putting on a show of sympathetically “listening” to Newton residents, but then going along with the plan she, the planning department, city consultants and well-connected developers wanted in the first place.

I participated in the “Hello Washington Street” exercise that the Fuller administration’s planning department and consultants put together to elicit residents’ input. It was clearly an act of political theater, with the city creating a plan that seems almost tailor-made for Mark Development:

The trend, on Washington Street from West Newton to Newton Corner, Riverside in Auburndale, Northland in Newton Upper Falls, and elsewhere, is clear: 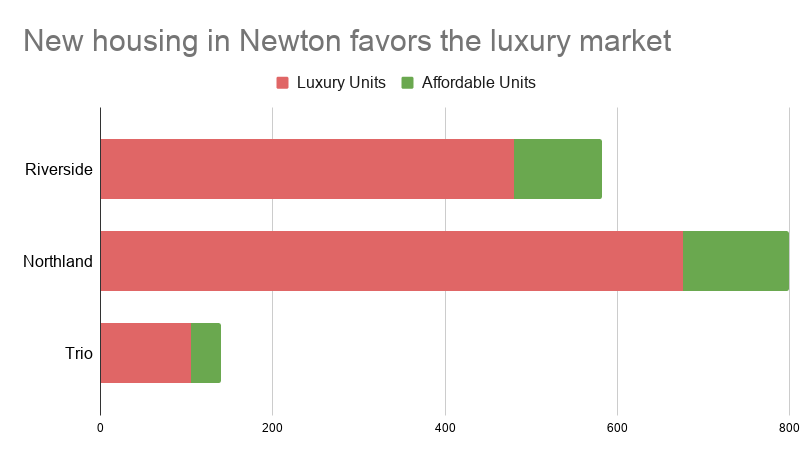 “Eliminating single family zoning is not off the table. I believe it was tabled until after the election, until next year. The other issue I have to push back with you, is you keep using the phrase ‘special and unique neighborhoods’ that we seem to want to protect. Everyone thinks their neighborhoods are special and unique and trying to figure out whose neighborhoods can have more density is not an easy task. There are already multifamily zones that we have throughout the city. And what we are seeing now are the teardowns and replacement of moderately sized homes to luxury units and that’s not making the city affordable. That’s what drives the biggest distrust in the city about eliminating single family zones and doing that trickle down housing theory.”

Sangiolo is right. And if these trends continue, Newton will become unrecognizable within a decade or two. From a collection of unique villages, the city will be transformed to a developer-controlled syndicate of high-density luxury apartment enclaves separated by acres of condo conversions and McMansions. Family-owned businesses will give way to chain stores, lab space, and high-end amenities.

Don’t believe me? Take a look at what happened to the Orr Block businesses in Newtonville, including institutions like Newtonville Camera, sent packing after Mark Development got what it demanded on Washington Street with an assist from the Newton-Needham Chamber of Commerce. Then there’s Russo’s just over the border in Watertown, destined to become expensive laboratories. This process will accelerate if things continue as they are in Newton City Hall and the Newton City Council.

6 thoughts on “Fuller vs. Sangiolo: Campaign donations and the development question in Newton’s mayoral election (updated)”