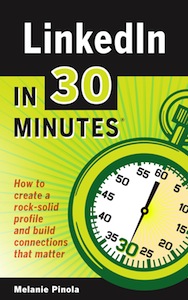 The experimentation continues. Last week, I launched a new marketing and sales experiment for LinkedIn In 30 Minutes, a LinkedIn book for newbies. It involves bulk sales of the paperback to a special audience segment: Career services offices of colleges and universities in the United States.

My hypothesis: Staff at career services offices of colleges and universities directly serve an audience we are already targeting: People who need to know how to improve LinkedIn profiles in preparation for a job search. Students and recent grads may not have much professional experience to begin with, or in the case of graduate students, they may have career gaps because they have been out of the workforce for several years. They want to present themselves in the best possible light to potential employers and LinkedIn recruiters, and having a rock-solid LinkedIn profile is critical. These are the types of readers we want for LinkedIn In 30 Minutes!

But the problem is: They may not know about the guide, or may not be looking for this type of guide. How can we reach them?

I decided to reach out to a few career services offices at universities, ranging from smaller schools such as Suffolk University in Boston to larger schools such as the University of Texas system. I found the contact information of some schools on the Web, and crafted a simple email pitch. Here are the elements:

I was most interested in the response rate for the paperback book. If they asked for one, I figured that would indicate a strong interest for a bulk purchase. So, I set up some bulk purchase options for LinkedIn In 30 Minutes. Of the 5% who responded with a request for the paperback, I mailed them a copy with a cover letter outlining the bulk prices. So far, no one has indicated they want to purchase a bulk order, but I will follow up with a call next week (Update: three bulk sales so far!). I’m really interested in finding out whether the guide meets their needs, and if so, what sort of bulk purchase terms would be most suitable — for instance, payment by credit card or invoice, the size of the bulk order, etc.

Last week, the latest In 30 Minutes® guide was released, a LinkedIn book. It’s really aimed at career-minded people who are just getting started with LinkedIn. However, I was reminded by the author — Melanie Pinola — that another target audience includes those people who have created rudimentary LinkedIn profiles, but have never optimized them for effective networking or job searches.

One of the challenges that Melanie and I faced was limiting the scope of the guide. LinkedIn can be a complicated tool — beyond profiles, there are a lot of features and extra services that are available. In line with the “In 30 Minutes” concept and the fact that the book targets LinkedIn newbies who might not even know what LinkedIn is, we really scoped it down to the basics: How to register for LinkedIn; how to improve your LinkedIn profile with keywords, headlines and summaries; networking strategies; job searches and the “hidden job market,” etc.

Dealing with too many LinkedIn features

Before she got started, Melanie produced an outline and we discussed the contents and what not to include. For instance, I asked her not to spend too much time on integration with Twitter. Setting up a LinkedIn company page is also out of the scope of the guide. I tell authors to aim for between 10,000 and 15,000 words, but in this case the first draft of the book came in at 18,000 words. While I like giving readers more than they bargained for, I also want to make sure the book can be read in a sufficiently brief period of time. What to cut?

A few wordy examples were obvious candidates for removal, but there were some other more significant sections — such as one about researching companies on LinkedIn — that were harder to get rid of. In the end, we decided to re-use as much as possible — some of the examples will reappear as blog posts that Melanie authors, while the more substantive examples will be “extra content” for the book website. We’ve also begun to plan posts for other audiences, such as this one targeting LinkedIn recruiters. It’s good for our readers, and it is also good for attracting new readers to LinkedIn In 30 Minutes .

Shaquille O’Neal received his doctoral degree in education last week. It wasn’t an honorary award — he earned it from Barry University, a private Catholic institution in Florida. It’s an admirable achievement that required lots of hard work, both on campus and off — he took many courses through distance education, but also had presentations and other activities on campus, as in the photo provided by Barry (the other person in the photo is David M. Kopp, Chair of the Organizational Learning and Leadership and Human Resource Development Programs).

But I noticed an interesting thread in the Gawker story about Shaq’s graduation. The entertainer and former basketball star received a master’s degree from the University of Phoenix prior to getting his doctorate from Barry. The Gawker story only mentioned Shaquille O’Neal’s UoP degree in passing, but it brought out a lot of spirited comments, many of them highly critical of University of Phoenix degrees.

Does “a Master’s degree from University of Phoenix” even mean anything?

A bunch of sarcastic comments followed (“It means your check to the University of Phoenix cleared”, “I hope so, that’s where I received my MD. Surgery rotation was cake”, etc.). But there was a serious response, too:

Lots of companies (and government agencies) pay for their employees to return to school for MBAs and such, and a substantial number of those people end up at UoP. It’s one of the top destinations because a lot of the time the employee just needs those extra letters behind his/her name, and the curriculum isn’t really that different from any other program.

However, one UoP supporter fired back at MicMutt with this:

You know what, if I ran a business I would take a UofP MBA over a BC/Columbia MBA every day of the week. Usually the people taking online classes are doing so because they are already out in the workforce, not everyone had daddy paying their tuition.

From there the conversation turned into a bitter war about privilege, ability, standards, career opportunities, and whether or not UoP degrees are legit. Example:

You know what? I do run a business and, as MicMutt said, a UoP MBA counts for very little. Traditional public and private not-for-profit universities offer online programs, and there are only two reasons someone would choose UoP:
1. Couldn’t get accepted to a program with legitimate admissions criteria;
2. Not sophisticated enough to realize that UoP is among the most expensive choices and has among the worst reputations.
This is not the sort of person I am interested in hiring for anything other than low-level grunt work.

These comments are cruel and unfair to students who put in a lot of work to earn their degrees. However, they do reflect real problems with UoP standards (which are affected by its for-profit mission) and perception in the marketplace. I wrote about this issue six years ago on another blog, and the post attracted more than 100 comments from UoP supporters and critics.

My publishing company counts newer for-profit schools as well as nonprofit educational institutions among its customers, with our LinkedIn book being one of the top sellers for students from both types of schools. It really shouldn’t come as a surprise. Regardless of which school they attend, many grad students want to improve their career opportunities. It’s not just about getting a bigger paycheck, but also being able to network with other professionals and finding new job opportunities via LinkedIn’s huge jobs database.

Update: According to Essence, “this doctoral degree is [O’Neal’s] proudest accomplishment.”