A professor of musicology in Harvard’s Department of Music for not quite three years before his death from a heart attack at 52, Otto Gombosi left with us a small but important legacy of research notes and transcriptions. His papers from 1925 to 1955 are now cataloged and open for research at Isham Memorial Library, the special collections library adjunct to the Eda Kuhn Loeb Music Library.

“With the death of Otto Gombosi, on February 17, 1955, musicology lost one of its most original minds. The loss is all the more tragic for having come so early in his career, before completion of nearly all the books and editions planned during the last years of his life. In their place he left a great quantity of notes and sketches — for a history of the basso ostinato forms of the 16th century and their lively progeny; for a history of renaissance dance and dance music; and for his long awaited study of Bela Bart6k, to mention only three of the subjects that held his interest over the years.

“Though he died with the books unwritten and with an incomplete, rather unsystemmatic exposition of his ideas scattered in a few articles, many book reviews, and an occasional monograph, many of these ideas continue and most certainly will long continue to influence and – such being their vitality – to irritate fellow scholars. Indeed, it is the continuing vigor of his ideas that makes it difficult to realize, a year after the event, that Gombosi is no longer here to defend his theories and to argue with that nimbleness of wit and breadth of knowledge which made him so stimulating a teacher and so formidable a critic.”

Otto Gombosi was born in Budapest, Hungary and lived in Berlin, Rome and Basle. Some of the materials in the collection date to his earlier life in Europe, and came with Gombosi to the United States when he emigrated in 1939. His transcriptions from libraries in Germany are particularly thorough and include copious transcriptions, among them reproductions of music from two sources which were then lost in the Second World War. These are listed in a special section of RISM B/VII, “1944 verbrannt,” and are preserved here, perhaps only here, in the Gombosi papers. 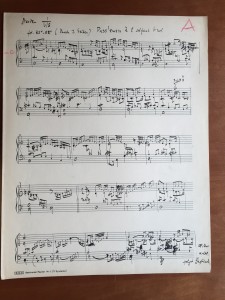 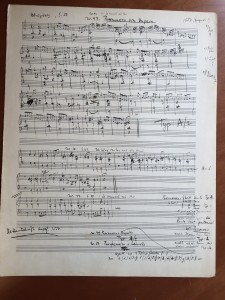