Happy Public Domain Day! Copyright has a limited duration, and it’s a moving wall – every January 1st, here in the United States, more items enter the public domain, meaning that they can be freely shared, reused, and remixed into new works by anyone. This year, books, musical compositions, and films from 1926 join the public domain. 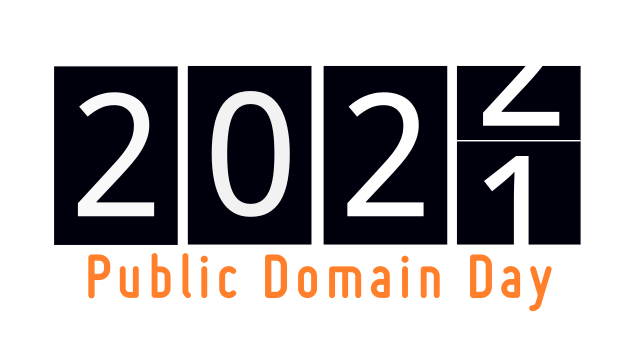 And thanks to the Music Modernization Act (technically, one of its components, Title II, the Classic Protection and Access Act), sound recordings published prior to 1923 enter the public domain in the United States. This is a really big deal! Since pre-1972 sound recordings didn’t have federal copyright protection until the passage of the MMA, they’ve been languishing in copyright limbo for decades – in some cases, for well over a century – and there are a lot of them: by some estimates, over 400,000 early sound recordings are now part of the public domain. This change to the law dramatically expands our ability to share early 20th-century sound recordings from our collections for listening, research, and reuse.

The Arabic 78 Collection at the Loeb Music Library 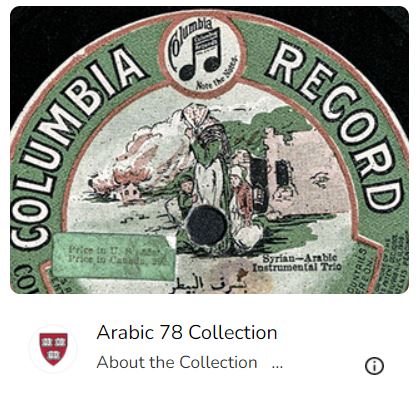 Visit our new digital collection to listen to selections from the Arabic 78 Collection!

To celebrate, we’re releasing a small subset of our early 20th century Arabic 78 collection on our new Aviary site. Acquired over many years, the Arabic 78 Collection currently contains nearly 600 cataloged recordings of Arab and Arab-American music spanning the first half of the 20th century, from roughly 1903 through the 1950s, valuable not only for their musical content, but also as artifacts of the early sound recording industry. We’ve been working to digitize this collection over the past several years, and we’re excited to begin sharing it! 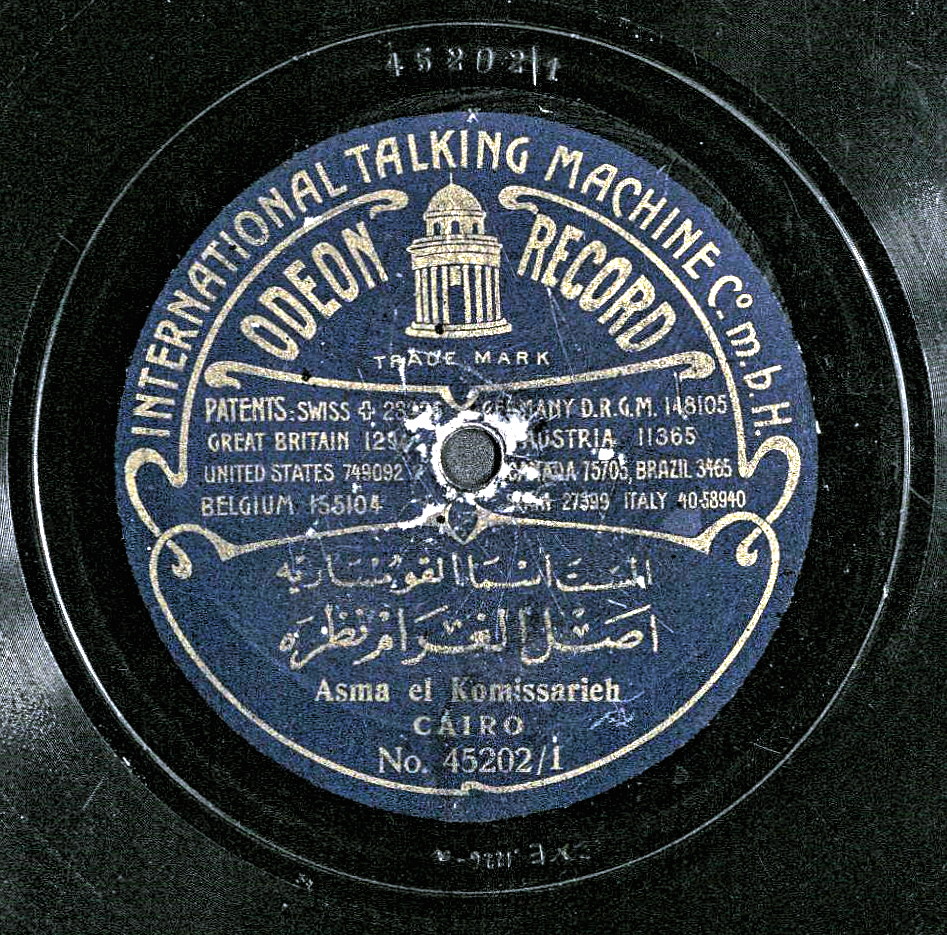 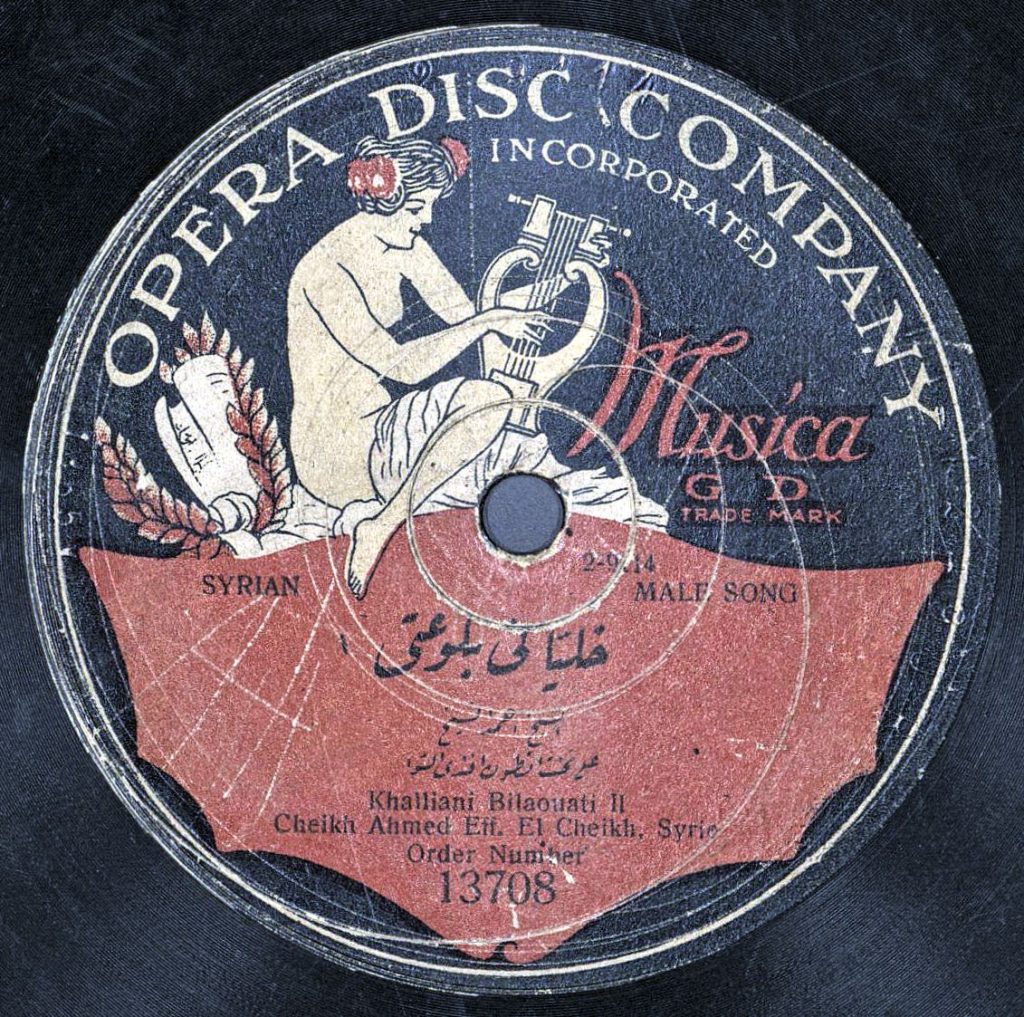 This rendition of “Khallayānī bilawʻātī” was recorded in 1910 on a Gramophone Co. master. The pirate label Opera Disc operated in New York in the early 1920s; the original Gramophone matrix number, 11-12490, is barely visible underneath the right side of the paper label. AWM 78-232

The recordings were made by large multi-national American and European record companies such as Gramophone Company, Columbia, Victor and Odeon, but significant local companies such as Baidaphon (the first independent record label in the Arab world) and Fabrik Mechian are also included, as well as Maloof and Macksoud from the US. The collection even includes discs issued on early pirate labels like Opera Disc Company. Later Arab-American record labels such as Alamphon, Arabphon and Al-Chark are also to be found in the collection. Genres cover a wide range of Arab musical forms including al-mawwāl (vocal improvisation), qaṣīdah (sung poems), taqsīm (instrumental improvisation), film music, ṭaqṭūqah (pop songs) and Qur’anic recitations.

For more about the collection, see our 2017 post, Arabic 78 RPM Records Collection: A Newly-Catalogued Treasure by graduate student assistant Farah Zahra, who researched and catalogued many of the recordings.

How We Dated These Recordings

Resources for dating the early discs in this collection are limited. In only a few cases has data come down to us from original company records, as is true with the multinationals Victor, Columbia, and the Gramophone Company. In those cases, a wealth of metadata was painstakingly researched by early discographers and has now made its way into database form for use in determining recording dates. Two examples are the Discography of American Historical Recordings and the Kelly On-line Database (Gramophone Company). But in some cases, ethnic or foreign series are missing or incomplete in these resources, which means we rely on the work of discographers who have focused on ethnic recordings. In the case of Arab-American recordings, we have used Dick Spottswood’s Ethnic music on records: a discography of ethnic recordings produced in the United States, 1893 to 1942 (University of Illinois, 1990) and his online Columbia Records E Series, 1908-1923 discography.

It is important to note that U.S. copyright law, including the new Music Modernization Act (MMA) that has now taken effect (as of January 1, 2022), is based on publication/release date rather than recording date. Precise data about release dates is even more scarce, though we do have information about U.S. Columbia releases. In theory, we can also use dated record company catalogs and supplements to help confirm release or publication date, but these are rare for ethnic/foreign releases. Although it cannot be taken as definitive, or as universal practice for the period, it seems an average of 8 to 10 weeks passed between recording and release date for early popular artists on Columbia (according to Allan Sutton’s Columbia Record Recording and Release Dates (1896-1934), p.6). But this timeframe could be rushed or held up based on the artist or demand.

We have made our copyright assessment based on all available data and specifically for use in the U.S. with regard to the new MMA laws. When we’ve made a reasonable determination that release dates occurred before December 31, 1922, the recording will be available to the public (and downloadable). For all others, users can request permission to hear the recording for a limited period (no download).

To share them, we’re using Aviary, a system that gives us a user-friendly way to create themed collections and add supplemental material, like high-quality images of the disc labels and matrix numbers (important sources for discographers and other researchers). As more recordings enter the public domain and we evaluate the copyright status of the discs in our collections, we plan to continue adding 78s to the collection. Many of the recordings on the site now are available for streaming and download; some are restricted. To request temporary listening access to those recordings, you’ll be prompted to register for a free Aviary account.

We hope you’ll enjoy this peek into the collections, and we look forward to sharing more!