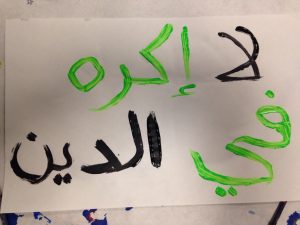 During the first week of our course, we were introduced to fundamental Islamic concepts. We discussed the origins of the Islamic ideology, its relation to other monotheistic faiths, and its permeation across cultures of almost every variety.

For this post, I painted an excerpt from Verse 256 of Surah Al-Baqarah (The Cow). It translates as follows: “There is no compulsion in faith [or religion]”. Simply put, Muslims are prohibited from forcing other people, Muslims or otherwise, to comply by any aspects of the Islamic faith, for any reason, whatsoever.

Throughout certain academic discourses, global media, domestic and global politics, and even within day-to-day interactions, extremist narratives of Islam have been perpetuated, normalized, and generalized to label all adherents of the faith, at the expense of millions of practicing Muslims around the globe.

A primary example of this phenomenon can be seen with the hijab (veil), a widely controversial topic among many critics of Islam, as well certain adherents of the faith. Throughout certain verses of the Qur’an, both Muslim men and women are instructed to dress modestly and act honorably when engaging with one another, but there are differing interpretations on the specifics of dress.

A verse from Surah Nur (the Light) covers one aspect of dress for Muslim women, relating to interactions with family members vs. non-family members:

In another verse, Muhammad is to instructed to tell Muslim women to cover themselves in order to protect themselves from lewd stares and harassment in public:

“Those who harass believing men and believing women undeservedly, bear (on themselves) a calumny and a grievous sin. O Prophet! Enjoin your wives, your daughters, and the wives of true believers that they should cast their jalabiya (outer garments) over their persons (when abroad): That is most convenient, that they may be distinguished and not be harassed. And Allah is most Forgiving, most Merciful” (33:58-59)

Essentially, Qur’anic scripture instructs Muslim women to cover their bodies and head (read: not face), to preserve their modesty. Men are also instructed to cover themselves and act modestly when interacting with women. Far more important than physical appearance and dress, however, is moral, honorable behavior when engaging with different genders.

Throughout centuries of patriarchal interpretations and cultures, the wearing of the hijab has been enforced by some countries by law, patriarchal structures, and cultural norms. Regardless of the interpretations of these verses, these mandates are in direct violation with a fundamental concept of Islamic faith: no compulsion in religion. Women are free to choose to wear a hijab or not, end of discussion. Some may abstain due to personal preference, fears for their personal safety, or simply differences in belief. In certain countries, the headscarf and/or veil have been banned because certain government officials believe they impede on personal liberty. Since the atrocities of 9/11, American Muslim women have increasingly reported harassment, discrimination, and assault within schools, professional environments, and public settings, for the simple fact that they choose to wear the headscarf. Interesting how an object originally intended to safeguard against harassment is now provokes such harassment itself, but I digress.

Regardless of how certain individuals, scholars, or institutions interpret Islamic scriptures or texts, faith is primarily and unequivocally an independent relationship between the human and God. It is beyond our authority to judge or control others’ actions in this life, unless they are actively causing harm. No person can carry another’s burden or take responsibility for another’s actions in the face of God. No one certainly has the right to compel another to act a certain way.

*Slavery within this setting does not refer to race-based slavery, as this was prohibited in Islam, but it was common practice among the Arabs to take prisoners of war as servants. In addition, consenting individuals who owed debts and could not find another way to pay them off would work as servants for a period of time to those whom they were indebted. However, Muslims who chose to take servants were instructed to treat them with respect, compassion, and justice.