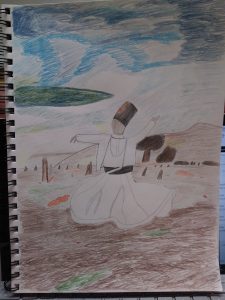 During the eighth week of our course, we discussed the Sufi traditions of Islam, as well as the roles music and dance play across various cultures. Sufism refers to the mystical, esoteric orientation of the Islamic faith which focuses heavily on connecting with the unseen, netherworldly aspect of reality. The exact origins of this orientation are not clear, but some believe it dates back as far as prophet Muhammad’s time. Sufi individuals strive to achieve spiritual enlightenment, under the instruction of a certified guide, known as a shaykh or pir. During this journey, individuals discipline themselves to let go of the ego, and embracing divine love.

A key narrative underscoring the Sufi outlook is that of the Day of Alast, the day when Allah gathered all of Adam’s unborn progeny and directly spoke to them. The story is highlighted in Surah Al-A’raf, verse 172: “When thy Lord drew forth from the Children of Adam—from their loins—their descendants, and made them testify concerning themselves, (saying): “Am I not your Lord (Who cherishes and sustains you)?”— They said: “Yea! We do testify!” (This), lest ye should say on the Day of Judgment: “Of this we were unaware.” This moment symbolizes the mankind’s original state of peace and presence in God’s divine love, a nostalgic moment all Sufi individuals strive to return to on their spiritual journey.

There are a wide variety of artworks and ritual practices specific to the Sufi traditions, most notably the sama’ and the ghazal. The sama’, which translates to “listening”, refers to the ritual listening to chanted poetry, sometimes accompanied by music. Sometimes the emotive power of the voice, in addition to the powerful messages of the words, prompts individuals to dance, possibly culminating in a state of ecstasy. During this state, the listener is beyond their senses, utterly enraptured in an otherworldly experience of divine love. The ghazal, or love lyric, refers to a poem, structured as a series of couplets which are usually independent in thought, but unified in their rhyme and meter. The ghazal, which was also popularized in Persian tradition, was heavily utilized by certain Sufi poets, who wrote poems on divine love. These poems would often contain wine imagery, which is prohibited legally in Islam, but symbolizes the individual’s non-rational, incommunicable experience when enraptured by divine euphoria.

A particular Sufi branch that has captured the attention of the West is that of the Mehlevi, founded by Jalal ad-Din Rumi’s son, Sultan Walad, in the thirteenth century. They are notable for their characteristic style of sama, during which individuals clothed in flowing white gowns spin in circles, which earned them the title “The Whirling Dervishes”. During this ritual, one hand is extended palm down to the ground, while the other is extended palm up to the sky, symbolizing that whatever provision comes from God from above, should be shared with all people on earth.  With each rotation, the dancer repeats the name “Allah” over and over, in a meditative state.  I have drawn a sketch of this particular ritual at the top of this post. Banned by Kemal Ataturk in 1925 as part of his efforts to secularize Turkey, the ritual was later reinstated only as performances for tourists. However, the ritual still thrives to this day. On a broader scale, the Sufi outlook and traditions have endured and thrived across the ages and across cultures, from the ghazal reciters of southern Asia to the pirs and shaykhs of western Africa.