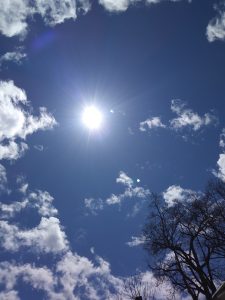 “Allâh is the Light of the heavens and the earth. The parable of His Light is as (if there were) a niche and within it a lamp, the lamp is in glass, the glass as it were a brilliant star, lit from a blessed tree, an olive, neither of the east (i.e. neither it gets sun-rays only in the morning) nor of the west (i.e. nor it gets sun-rays only in the afternoon, but it is exposed to the sun all day long), whose oil would almost glow forth (of itself), though no fire touched it. Light upon Light! Allâh guides to His Light whom He wills. And Allâh sets forth parables for mankind, and Allâh is All-Knower of everything.” (24:35)

This is the Verse of Light, from which the name of the 24th chapter of the Qur’an is derived: An-Nur, or The Light. An-Nur is also one of the 99 Names and Attributes of Allah. Its connotes a variety of meanings: the brilliance of Truth in a world of darkness and confusion, the light of His divine revelation that guides us on our journey to Him in this life and the next, His warmth that radiates throughout creation, and so much more.

This surah was revealed to the Muslim community of Madinah during a time of great turmoil. Shortly after returning from an armed conflict with a tribe called Bani Al-Mustaliq, Muhammad’s army set up camp a distance away from Madinah. A’ishah, his wife, left the campsite to go relieve herself, but when she returned, she realized she had dropped her necklace. She left in search of it, and in her absence, the army had moved on. She had been traveling in a special closed carriage designed to sit on top of her camel, but due to her light weight, her carriage-bearers had failed to notice her absence. Lost and distraught, she waited for a search party to retrieve her and fell asleep.

She was later awoken by a companion called Safwan bin Mu’attal Sulmani, who recognized her, realized the situation, and promptly escorted her back to Madinah, allowing her to ride his camel while he pulled it, out of modesty. The sight of the two individuals returning alone after a prolonged isolation in the desert prompted an ill-intentioned individual known as Abdullah ibn Ubayy ibn Salul to instigate a shameless slander on the honor of the prophet’s wife and his companion.

After being shunned by slanderers, and distanced by many individuals who believed the slander, A’ishah began to give up hope that her reputation would be ever be restored. After a month of turmoil and uncertainty, revelation was sent down, clearing the names of A’ishah and Safwan, condemning the originators of the slanderer, and reprimanding the Muslim community on not assuming the best of their fellow brother and sister. This connotation of Allah’s Light of Truth shining down and clearing away the haze of darkness is quite apparent, particularly in light of the events surrounding the revelation of this surah.