The Mi’raj and Prophet Muhammad’s many faces 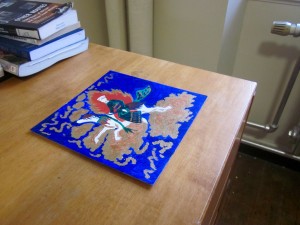 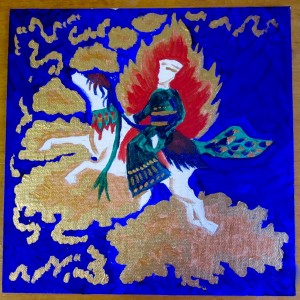 This week we discussed the prophet Muhammad and his veneration in many Muslim communities. As a Catholic, I am tempted to think of Muhammad in the same terms as Christ in the Christian tradition, but our readings and professor Asani’s discussion place the Qur’an in that more exalted place, with Muhammad as the bringer of light rather than the light himself. This small switch in thinking places the prophet’s many roles in a different context for me as well. Because Muhammed translates the light of God for humanity, he can- and must- take on all the roles necessary for this mission: the honorable messenger rasul karim, the authority and master-guardian wali of believers, the teacher mu’allim of the Book and Wisdom, the witness shahid of humanity, the the light nur from God, the intercessor, and the mercy rahmah to the world.

I found Muhammad’s ascent into heaven, the mi’raj, to be an especially interesting illustration of his many roles as a blessed messenger. Surah 17 praises “he who travelled from the sacred mosque to the farthest sanctuary,” Muhammed guided by the angel Jibril and carried by Buraq through the seven levels of heaven. Like the many roles of Muhammed, the many versions and interpretations of the mi’raj emphasize different aspects of Muhammad’s blessings and messages from God. Some visual interpretations I personally found most compelling were the Persian miniature paintings of Muhammad’s journey- I love the attention to detail, vivid color, and reverence given to each figure, cloud, and star. I painted Muhammad with a veil over his face to leave his identity and diverse roles open to the viewer’s interpretation, and I left Buraq white. My seven clouds show the seven levels of heaven, and I used gold to emphasize Muhammad, Buraq, and the heavens. In section, I learned that my visual translation as a Christian also has a long history- Dante’s journey through Heaven, Purgatory, and Hell in the Divine Comedy draws some inspiration from Muhammad’s journey. The mixing of these religious traditions, artistic expression, and ideas as early as the 14th century surprises me, but also intrigues me to look for other histories of travel and exchange.

Islam around the world

I really enjoy how Professor Asani emphasizes religious traditions, artistic expression, architecture, and music from around the world. The global nature of Islam was one of the biggest surprises to me so far in this class.

Before beginning Professor Asani’s class, I had assumed Islam to be a primarily Middle Eastern faith. However, as I listened and read further, I learned that the highest proportion, more than 13%, live in Indonesia (as of 2010, Pew Research Center on Religion & Public Life). The wide geographic distribution and broad range of expressing faith surprised me, though perhaps they should not. Islam, like the other Abrahamic faiths Judaism and Christianity expanded from a prophet in what is now considered the Middle East to a small circle of followers to worshippers around the globe. As the youngest Abrahamic faith, Islam encompasses many other traditions- one of Muhammad’s titles is خاتم النبيين‎, Khatam an-Nabiyyin, the Seal of the Prophets. Though Muhammad is the last and most important of God’s messengers, he ends a long chain reaching back to Adam. Some earlier prophets, anbiya’, are even considered messengers, or rusul: Moses, David, and Jesus among them (Renard, Seven Doors to Islam). Furthermore, because the Qur’an states, “And We sent some Messengers whom We have already mentioned to thee and some Messengers whom We have not mentioned to thee…” (4:165), holy figures from traditions around the world might be representatives of the God speaking through Muhammad. Professor Asani discussed how some South Asian Muslims considered the Vedas potentially prophetic and translated the Sanskrit or how Lord Krishna might be a prophet of Allah.

I designed a map of the countries with the largest Muslim populations to try to introduce the broad geographic, cultural, and theological range of Islam I hope to learn a little more about this semester. Check it out here: http://arcg.is/21Cnzhf and click through the countries for a small illustration of Muslim art, architecture, or worship as well as a link to the website where I found the picture, most of which have a story or links to further reading.

I wasn’t sure at first how to construct a blog for my last requirement at Harvard, AI54: For the Love of God and His Prophet. After a few weeks of Professor Asani’s lectures though, I’m thinking more about the centrality of the Qur’an to Islam and the centrality of trying to read the Qur’an in my own work as a student.

This image, from Hasib Wahab on National Geographic’s “Your Shot” site, captures some of how I’m feeling as I try to approach this text, so different from others I have read and from my own religious tradition. These children at Moktob are studying the Qur’an, among other subjects. Read more and see Wahab’s other pictures here: http://yourshot.nationalgeographic.com/photos/2659175/