Sufism and the Mourides of Dakar

The Mouride brotherhood, an Islamic Sufi movement centered on Senegal and the Gambia, receives its name from مُرِيد‎  or murid, Arabic for “one who desires,” the disciple of a spiritual guide. That original guide and founder of the Mourides, Shaykh Amadou Bamba, was known as a saint but also helped inspire resistance to French colonial rule, though he never organized armed resistance. This week we read part of Allen F. Roberts’ and Mary N. Roberts’ A Saint in the City: Sufi Arts of Senegal on Mouride  visual culture, especially that centering around Bamba. His face and figure illuminate shop walls, junkyards, hinged portraits, and car-rapide taxi buses.

The omnipresence of these images surprised me, as I had previously thought that all Muslims saw figural imagery as forbidden. Though many do consider images, especially human, as sometimes idolatrous, the illuminated manuscripts and small paintings from Mughal, Persian, Ottoman, and Egyptian artists also testify to a long tradition of depiction of people and stories. Robert and Robert discuss the apparent paradox, explaining that though the Qur’an does not forbid imagery, the Hadith, tradition of the doings and sayings of the prophet, contains statements about how Muslims should illustrate their faith. Grabar claims that prohibitions on imagery also arose due to interactions with Christians and Jews, possibly coming from Jewish thinkers or opposed to the Byzantines (40).

However, I found one particular Mouride image especially interesting: the single existing photograph of Bamba, taken in front of a mosque in Djourbel, Senegal during his house arrest as an accused agitator against the French. I do not know of other religious figures with photographs, or many important historical figures with only a single mechanically made image. Also, in a world where images hold baraka benedictions associated with divine grace, where producing these images represents an act of worship, and where on seeing Bamba’s image, as the artist Mor Gueye says, “you feel hope being released inside you. You feel happiness being released inside you just by looking at the image” (45), how does a mechanical image made in a very different mode fit? The iconic photo reminds me of the Virgin of Guadalupe in its fusion of indigenous and world religion and Che Guevara in its high contrast and omnipresent reproductions. I reproduced Bamba’s photo myself to think more about how his depiction can be worship. I chose simple black ink on white paper in emulation of the simplicity and almost overexposed nature of the original and ignored the background to center on the saint, as many Senegalese painters do. 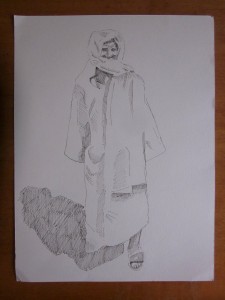