After discussing the role literature and the arts can play as forms of discussion, critique, or resistance to particular theologies or ideologies, this week we read Marjane Satrapi’s graphic novel Persepolis and Rokeya Hossain’s short story “Sultana’s Dream.” “Sultana’s Dream” as much as Persepolis intrigued me for Hossain’s unconventional choice of medium for her story-as-resistance. Instead of her native Bengali or any other of the several languages she spoke, Hossain wrote her critique of purda, the seclusion of high-class Muslim women in her society, using English to tell a short, imaginative story. The narrator dozes off, then is woken by a women she takes as her friend, Sister Sara, who subsequently guides her through a beautiful, well-ordered world where men instead of women are isolated in the zenana. Hossain’s “Lady Land” lacks crime. Work is efficient and limited to two hours a day. The only religion is love. Hossain seems to hide or package her message within this beautiful imagined world, as well as by her choice to encapsulate it within a dream, and as well as by writing in English. Hossain’s unconventional choices let her speak more freely about what she observes of purda and how her society might reform. Similarly, Satrapi uses the less common format of a graphic novel for her irreverent and critical portrayal of growing up in Iran during the Iranian Revolution. Her images provide new points of entry into her narrative, and her choice of a child narrator lets her play with serious topics. Again, she writes in English. 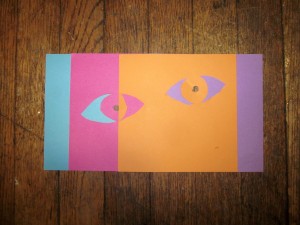 Both stories prompted me to think about the importance of an author’s perspective and the veils she uses to write her message,  as well as about how these works might give a window into their authors’ lives. In response,  I created a small collage with two eyes. The narrator’s large, bright eyes and observant frown on the cover and in the first few panels of Persepolis captured my imagination more than any other text and images in the story. The eyes seem to let me imagine myself as her, but Satrapi’s eyes also look out through personality, culture, history, and religion different from my own. Accordingly, I cut panels of different colors, leaving only small pupils empty for the viewer to really look through. Though “Sultana’s Dream” and Persepolis give me a window into their writers’ worlds, I still feel that window is so small and so filtered.

The Conference of the Birds