HomeSMACKDOWN: Jordan Peale’s GET OUT vs. Disney’s BEAUTY AND THE BEAST 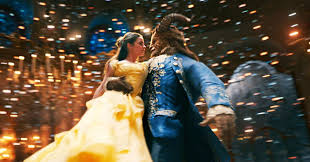 (SPOILER ALERT FOR GET OUT)

It’s rare to have a moment when two high-wattage cultural events collide to bring back a story–in this case Beauty and the Beast.  One of those blockbuster films, Disney’s live-action version of that story, “smashed records,” as they say in the business, with a record-breaking $170 million debut and $350 worldwide. Easily earning back its $160 million budget (an entire village was constructed in the English countryside for the opening scene, with 150 extras, 28 wagons, and hundreds of live animals, not to mention Emma Watson), it stuck closely to the script of the 1991 animated Beauty and the Beast, even as it piled on special effects and ornate excesses, all the while promoting the cute in the service of what Mel Brooks famously called “Moichandising” (see clip from Spaceballs below).

Then there was Jordan Peele’s Get Out, a Beauty and the Beast story that pulls out all the stops and gives us what horror movies do best, exaggerating and amplifying our cultural anxieties, and putting what Frank Bruni of the NYT called a “fantastical, grotesque spin” on things. Get Out (budget of $4.5 million) as a Beauty and the Beast story? Yes, it’s that and Bluebeard too. Only in this case, the monster is Rose (get it?), played by Allison Williams. As the social messaging of so many Beauty and the Beast story tells us, appearances are deceiving, and in this case they are beyond what we could imagine. Rose is the ferocious beast who lures an innocent into her childhood home, from which there appears to be no escape. She is also a Bluebeard figure, a monster straight out of our culture’s master horror-narrative, with its classic tropes: a secluded mansion with a dark place inhabited by a brooding homicidal maniac with secrets stored in a closet (in Get Out it’s Rose’s stash of photographs of victims pre-dating her relationship with Chris). And suddenly we see how Jordan Peele, unlike Disney, hit the refresh button and inflected the tale as old as time in new ways that speak to our own cultural anxieties about race and gender.

This morning CNBC had a brief segment on the box office numbers for Disney’s Beauty and the Beast, and Joe Kernen pointed out that Disney had not even made the story up–gasp! Wasn’t the story invented in 1740? In a French novel? Gabrielle-Suzanne de Villeneuve did indeed write La Belle et la Bête, but it was hardly the “original.” In my new anthology, Beauty and the Beast: Tales about Animal Brides and Grooms from Around the World (Penguin 2017), I start with the Ancients, with stories like the one about Zeus and Europa, Cupid and Psyche, Hasan of Basra, and connect the narrative circuits of the tale with a global network of stories about Beauties and Beasts. There is no original, no pure, untainted right and true foundational story—just variants.

Still, not all adaptations are equal. There are the nostalgic ones, the ones that want to bring back earlier versions, just as the live-action Disney Beauty and the Beast aims to preserve, sanctify, and re-brand the story for a new generation. And then there are the adventurously inventive, creative adaptations that shock and startle us, rewiring our brains, and making us think more and think harder about the terms of the film. “Beauty and the Beast” is suddenly not just a tale as old as time, but a story that takes on new relevance as it resonates with fears and desire that beset us today.

2 thoughts on “SMACKDOWN: Jordan Peale’s GET OUT vs. Disney’s BEAUTY AND THE BEAST”