After listening to Emma Gonzalez, the Marjory Stoneman Douglas High School student who survived the Parkland shooting and spoke at March for Our Lives in Washington DC, I began to reflect on all our cultural stories in which women use words and silences as weapons in the service of social justice.  There’s Philomela and Scheherazade, and their life stories set me to thinking about all the ironies embedded in their tales about telling tales, with Philomela turning into a nightingale by Ovid (the female of that species famously does not have the gift of song) and Scheherazade telling stories about licentious women but living in a culture that restricted women’s sexuality.
It is the human condition to live with cultural contradictions, and maybe for that reason it is not so surprising that in the public arena women are raising their voices in protest (Emma Gonzalez’s words became powerful poetry, and I will not forget her “nevers”) while in our popular entertainments, women are resorting to weapons.

There is Jennifer Lawrence playing Katniss Everdeen from The Hunger Games, glammed up with an outfit that has become the source of inspiration for fashion designers. (Don’t forget that one critic viewed The Hunger Games as a fable of what it’s like to be in high school.) Reflecting on the lack of logic in the games, Laura Miller writes:

If, on the other hand, you consider the games as a fever-dream allegory of the adolescent social experience, they become perfectly intelligible. Adults dump teen-agers into the viper pit of high school, spouting a lot of sentimental drivel about what a wonderful stage of life it’s supposed to be. The rules are arbitrary, unfathomable, and subject to sudden change. A brutal social hierarchy prevails, with the rich, the good-looking, and the athletic lording their advantages over everyone else. To survive you have to be totally fake. 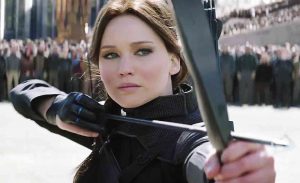 Then there is Hanna in Joe Wright’s 2011 action adventure film–a genetically modified teenage assassin with bows and arrows and guns. 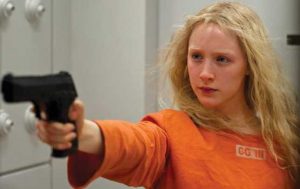 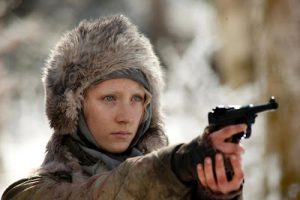 And Frances McDormand is weaponized again and again. 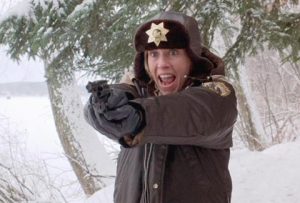 As is Rey from The Force Awakens, another trickster who is skilled in fighting back, and who has been turned into an action figure. 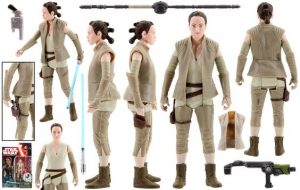 Female tricksters in stories and myths from times past used words and wit to right wrongs and change their cultures.  These days, when we go to the movies we see revenge plots, with women turning first to arsenals of guns and steel to get even, doubly ironic since that has been the strategy of those to whom women are offering resistance in real life.

2 thoughts on “Words and Weapons”