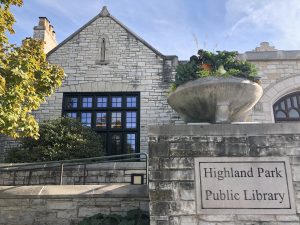 When my brother texted the news of a shooting in the town where we grew up, I felt as if I must be reading an irresponsible, ill-conceived prank headline from The Onion or another satirical paper. Sleepy Highland Park the site of a mass shooting at a 4th of July parade down Central Avenue, a street lined with beach chairs, bikes, and strollers?

The house in which we lived is just three blocks away from where the parade came to a halt, down the street from the central library, and within walking distance of the train station that took you to Chicago. I later learned that the shooter had stationed himself on the roof of what had once been Garnett’s Department Store. That was the place I worked on weekends during high school, selling sportswear on the first floor to suburban mothers in the morning and doing the accounts for the entire store later in the day.

My first memories of Highland Park are breakfast at the home of the Mussers, with the intoxicating aroma of waffles in the air. I grew up in postwar Europe, and I was a skinny child, always hungry. We were newly arrived immigrants, refugees from Hungary, sponsored by the Presbyterian Church in Highland Park. The church was later to install us in a house left to them by a childless couple, but for now we counted on the kindness and patience of parishioners, who welcomed, with warmth and generosity, a family of five, with three young children and  a fourth on the way. My brother was born in the hospital where the injured were taken after the July 4th shooting. It was the same place where my father performed cataract surgery for many years.

News of shootings is always devastating and impossible to process. There’s no making sense of assault rifles and streets lined with families celebrating a holiday with marching bands. When it hits home, it hits even harder, with unforgiving force. A friend still living in Highland Park sent an e-mail describing what it was like to have a man just a few feet away shot in the head before her eyes. She and her husband, both septuagenarians, managed to escape the barrage of bullets.

What has brought tears to my eyes hour after hour in the last day? The memory of the kindness of those living in Highland Park, a form of kindness that was instinctive and that did not ask for anything in return. They were the shooter’s targets.

One thought on “I grew up in Highland Park, Illinois”