After a dry summer, a fire began on 8 October 1871 west of the Chicago River. Aided by strong winds, the fire ravaged the commercial district. When it finally succumbed to rain after thirty-six hours, a third of the city was homeless. Afterwards, the working class moved west; the rich resettled to the north; and the city’s commercial and industrial sections consolidated. The reorganization heightened class and ethnic tensions. By pushing for rigorous restrictions on inflammable buildings, wealthy, insured landowners tried to force uninsured, working-class homeowners in the business district to sell their property at a loss.

Before the embers lost their glow, writers began mythologizing the Chicago Fire. Some myths focused on blame. A largely anti-Catholic, anti-immigrant press focused on the figure of the clumsy Cate O’Leary whose cow kicked over a lamp. Other myths focused on the future. In the 4 November 1871 issue of Harper’s Weekly, one writer imagined a better city “literally tried as by fire.” A year later, the first novel of the Fire, Edward Payson Roe’s Barriers Burned Away, used the disaster to envision a more unified city. 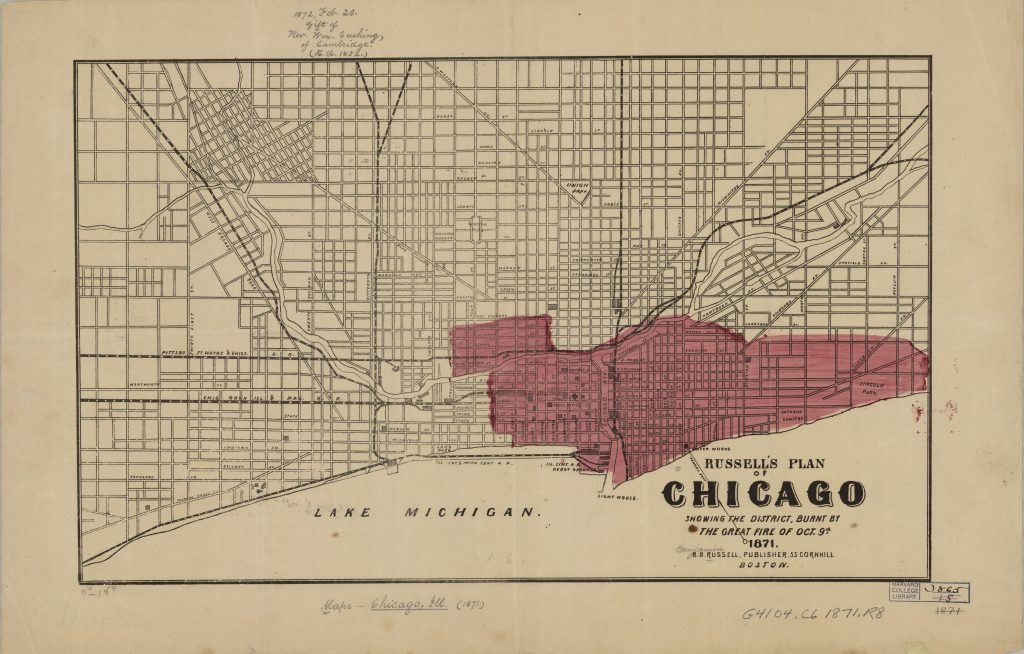 “Map of Chicago; showing the parks, boulevards, and burnt district” (1871) 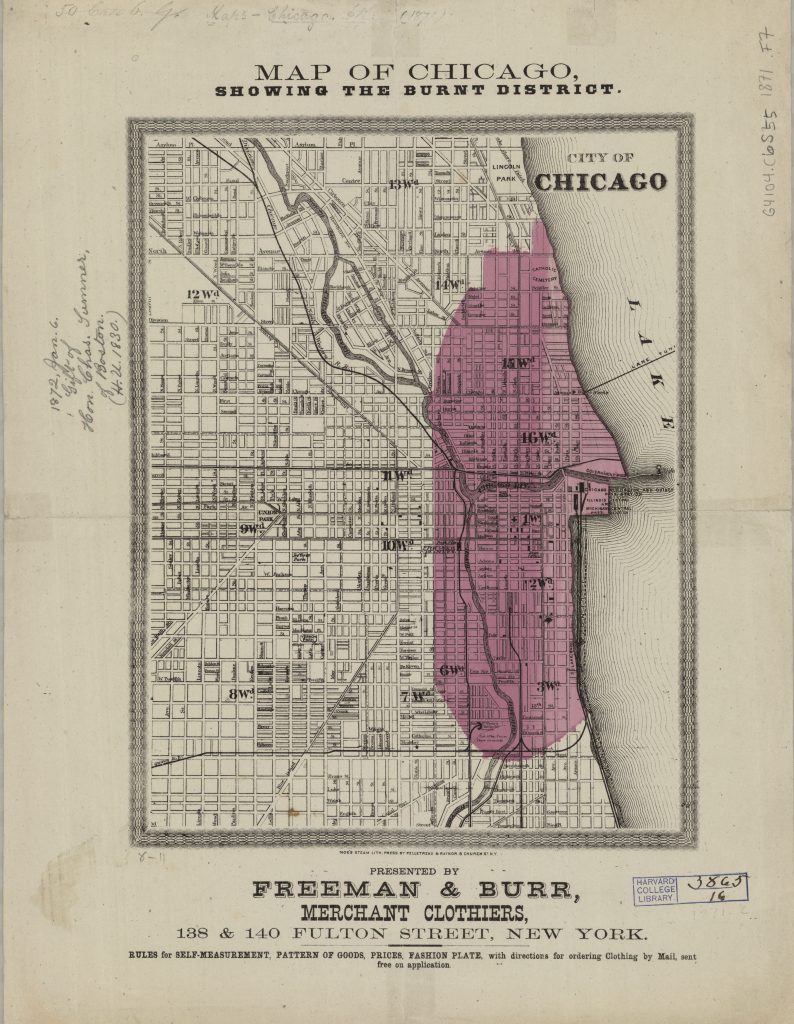 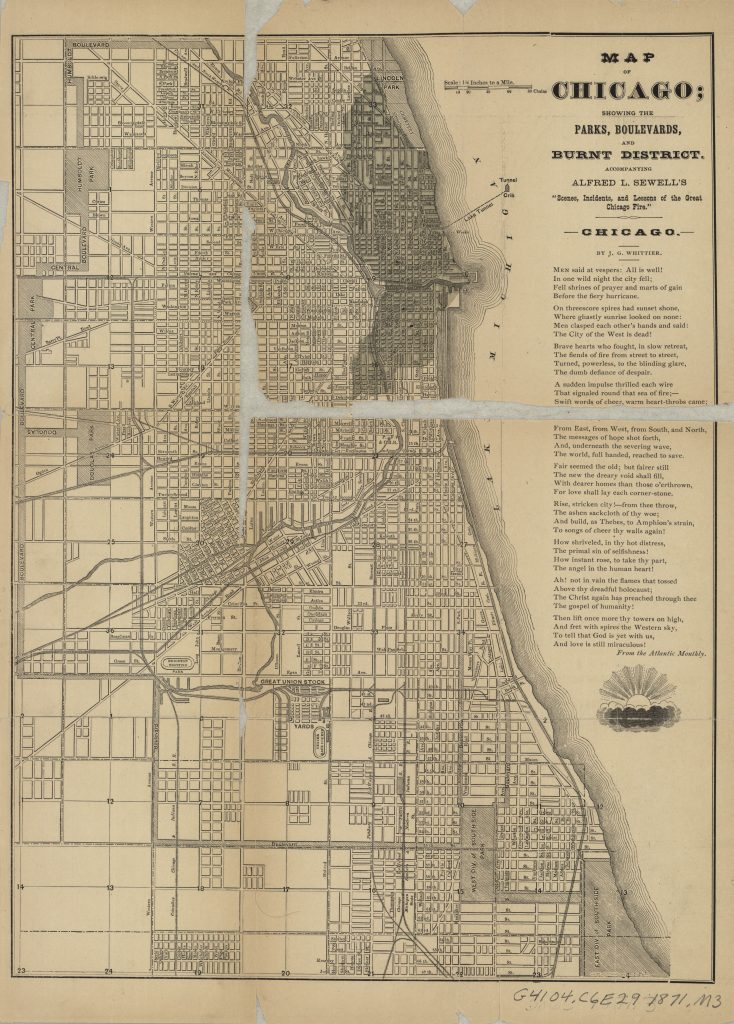 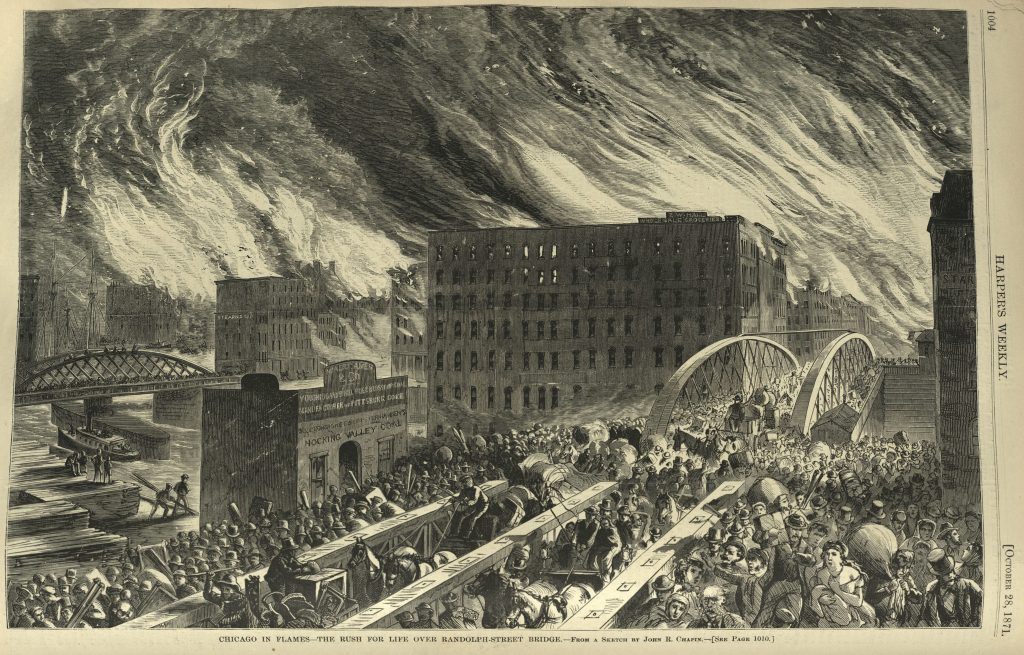 “I soon found myself on the Randolph Street Bridge, the point whence my sketch was taken. No language which I can command will serve to convey any idea of the grandeur, the awful sublimity, of the scene. For nearly two miles to the right of me the flames and smoke were rising from the ruins and ashes of dwellings, warehouses, lumber-yards, the immense gas-works; and the view in that direction was bounded by an elevator towering one hundred and fifty feet in the air, which had withstood the fire of the night before, but which was now a living coal, sending upward a sheet of flame and smoke a thousand feet high”

The 28 October 1871 Harper’s Weekly included an overview of the fire alongside a firsthand account by John R. Chapin (1827-1907), a regular illustrator for the magazine who happened to be travelling in Chicago. Harper’s printed copies of Chapin’s sketches alongside copies of sketches by Theodore Davis and prints made based on photographs.