The Great Fire of London lasted for four days, beginning early in the morning on 2 September 1666—12 September in the Gregorian calendar of Doornick’s map. The fire destroyed close to eighty percent of the city’s center—totaling 13,000 homes, forty businesses, and eighty-four churches—including St. Paul’s Cathedral. With 100,000 people without homes, many residents and merchants tried to quickly reestablish their lives by moving to the outskirts of the growing city. But interest in the Fire was not limited to London. In the middle of second of three seventeenth-century wars with England, the Dutch Provinces published pamphlets casting the Fire as God’s judgment on their belligerents.

Both these maps imaginatively bring distinct Londons together for their viewers—an old London constituted by lost landmarks; a burnt and burning London; and a London not yet built. They are maps that make the Fire legible as an event and that define the kinds of urban space that the Fire produced. 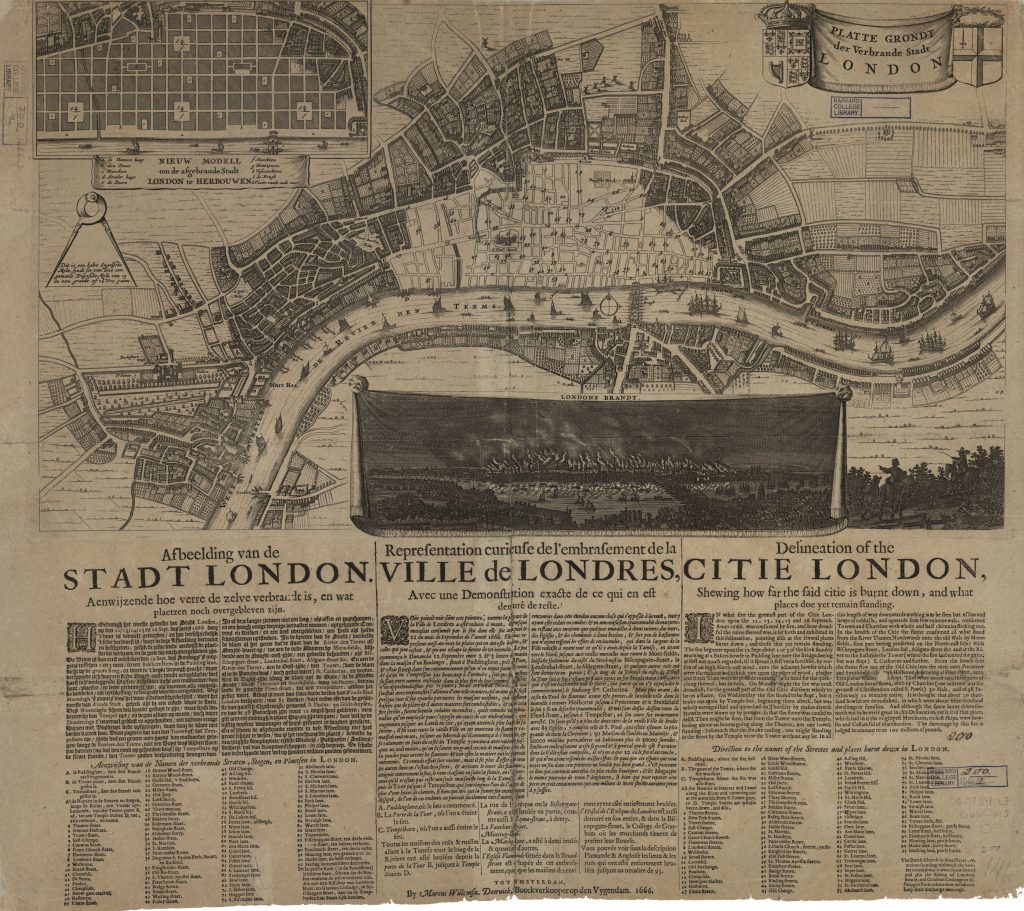 Wenceslaus Hollar, “A true and exact prospect of the famous citty of London …” (1666)

Because it destroyed the city’s existing stock of maps of London, the Fire induced a new survey and a huge production of London maps. These maps simultaneously made sense of the damage, remembered the shape of a lost city, and imagined a rebuilt London. Indeed, portable maps and narrative tours of the city became important genres to help acquaint Londoners with their own city. The one provided a material command over the city; the other a flexible guide to the new urban experience.

Looking back on the Fire, Hulsbergh’s map shows Christopher Wren’s proposed improvements, which focused on wide boulevards and public spaces that would surpass Paris, the other major European city. Although few of Wren’s improvements actually occurred, you can see here, at least, slightly wider streets such as Queen Street and better traffic access for mercantile places such as the Royal Exchange. Indeed, the government needed to entice merchants and residents back into the city to re-establish tax income as they struggled to pay for even these more modest improvements. 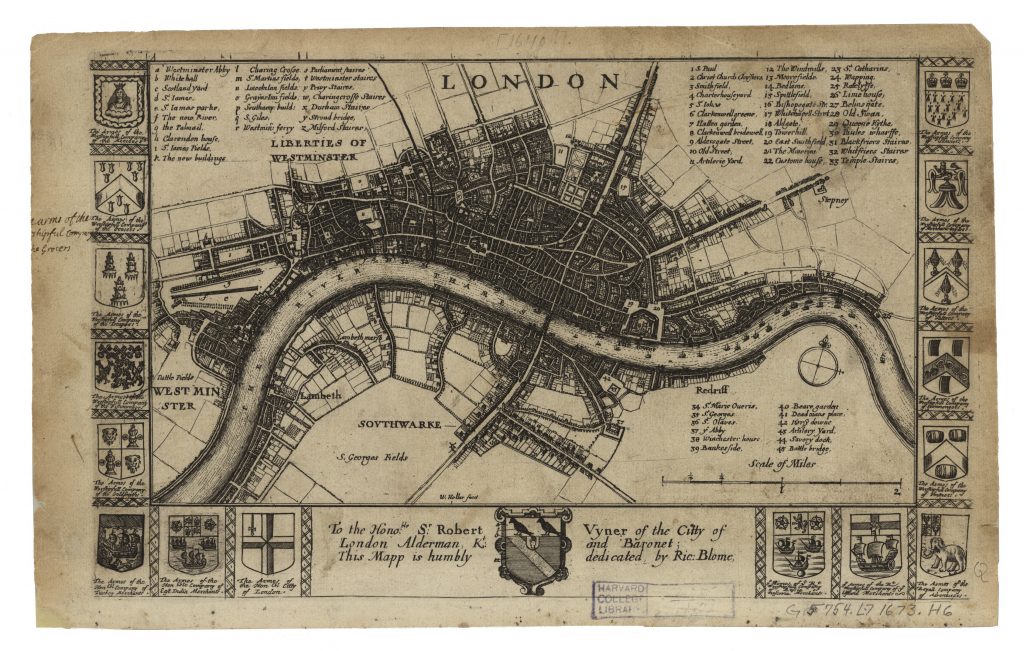 Robert Walton, “Englands glory, or, the glory of England being a new mapp of the city of London” (1676) 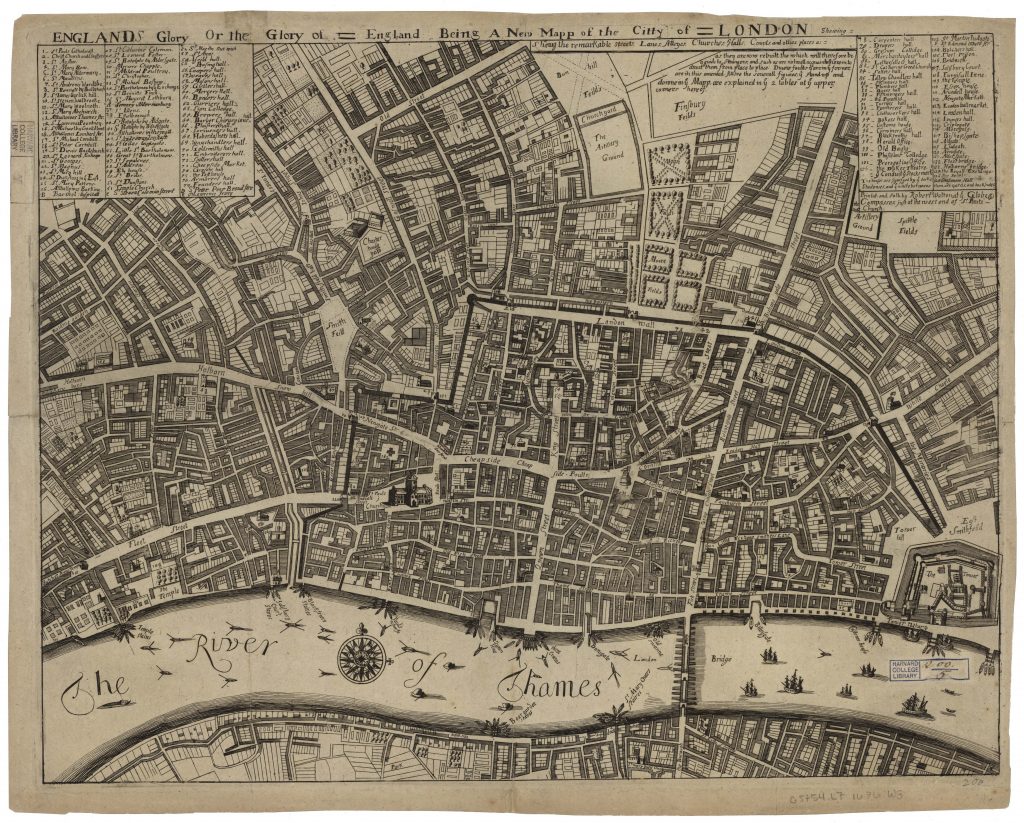 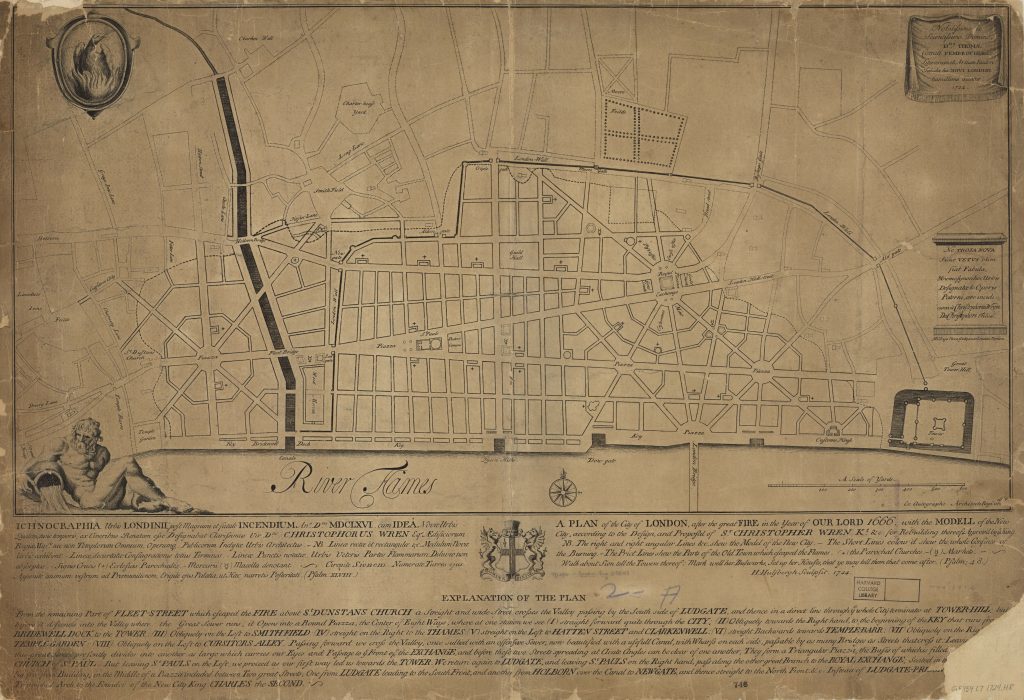 Some stir up Coals, and watch the Vestal fire,

And while through burning labyrinths they retire

With loathing Eyes repeat what they would shun.

The most in fields like herded beasts lie down,

And while their babes in sleep their sorrows drown,

Sad parents watch the remnants of their store.

Methinks already, from this chymic flame,

Rich as the town which gives the Indies name,

With silver paved, and all divine with gold.

Already, labouring with a mighty fate,

And seems to have renewed her charter’s date,

Which heaven will to the death of time allow.

And, opening, into larger parts she flies.

John Dryden (1631–1700) ends Annus Mirabilis: The Year of Wonders, 1666 (1667) with the terror and hope of the Great Fire. After taking his reader from the urban wasteland to the homeless residents, Dryden envisions a better city and a more commercially prosperous nation emerging from the devastation.