After seven hours of fire beginning at noon on 10 April 1845, Pittsburgh lost 1,000 buildings in a twenty block area in the center of the city. While only two people died, personal and commercial losses totaled between $10 and $20 million (depending on your metrics, $10 million in 1845 would be between $250 and $320 million today). Because insured businesses tended to carry fire insurance in the same local insurance companies, these companies failed when the same burden fell on the same firms. In this respect, the Pittsburgh Fire was a lesson to combine insurance with companies in various locations.

This map is so small because it accompanied J. Heron Foster pamphlet, which included several brief narratives of the fire, a list of the damages and contributions, and a plea for continued aid. As he writes, given Pittsburgh’s beneficial location on the Ohio River, “it would be downright stupidity to suppose that a fire … would permanently affect our prosperity.” In a more personal touch, the pamphlet captures the distributed impact of the fire by listing all the individual losses, from the $35 lost by “Mrs. Adams, widow” to the tens of thousands lost by businesses.

E. McGowan, “Map of Pittsburgh & vicinity” (1845) in J. Heron Foster, A Full Account of the Great Fire at Pittsburgh … 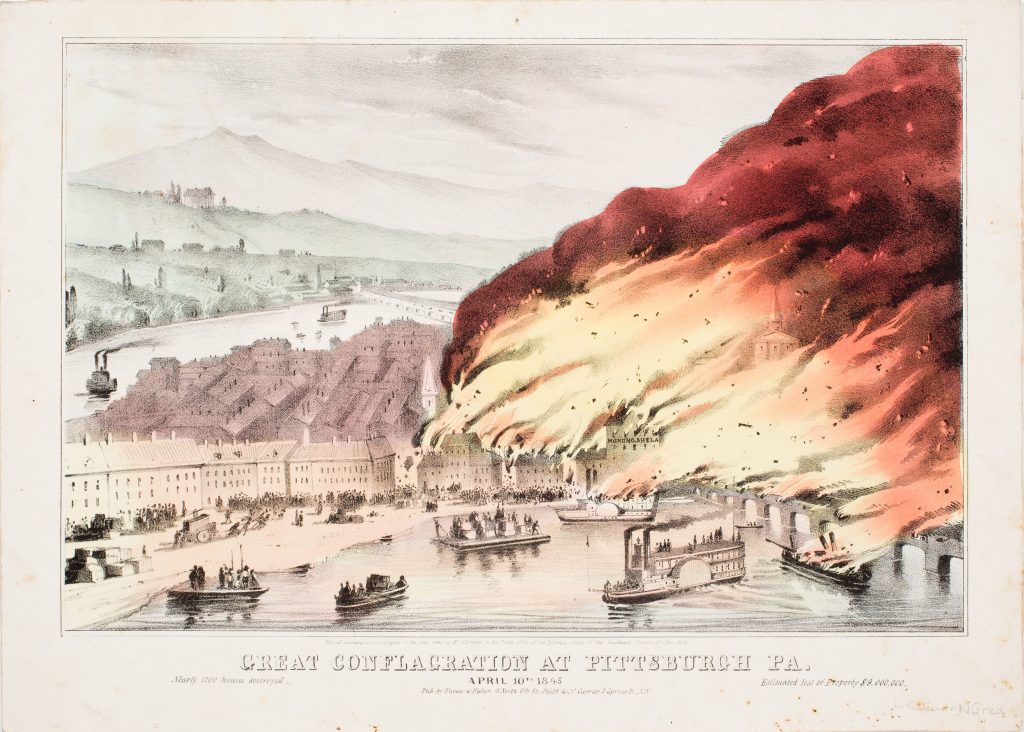 Nathaniel Currier (1813-1888), who is best known as one half of the Currier and Ives printing franchise, skillfully manipulated the lithograph to make some of the most iconic images of life in the nineteenth-century US—from daily, rural life to disasters such as this fire. Born in Roxbury, Currier opened his print firm in New York City after apprenticing in the first US lithography studios in Boston and Philadelphia. Drawn not from first-hand experience but from newspaper accounts and other images, this print was published both by his firm in New York and by Turner & Fisher in Philadelphia.