The fire that lasted through the afternoon and evening of 6 June 1889 in Seattle destroyed nearly all of the city’s wharfs and more than thirty commercial blocks downtown. With no reported deaths, however, the fire quickly became a cause around which the city’s business leaders could unite to modernize the city. Within two days, the Seattle Post-Intelligencer reported repeated applause at a town meeting to Jacob Furth’s proclamation that “we will look upon yesterday’s fire as an actual benefit to Seattle … we will have a finer city within eighteen months.” Unlike many other cities faced with the tension between quick construction and planned improvements, Seattle successfully redrew property lines, raised the grade of lots, widened streets, and committed to stone and brick buildings; this latter commitment, however, was more rhetorical than practical as the city was unable to enforce new “fire-resistive” building practices.

Augustus Koch (b. 1840 was a travelling draftsman of large, lithographed city views. Subtitled “Eighteen Months after the Fire,” Koch’s depiction of the city feeds into the rhetoric of businessmen like Jacob Furth who projected the quick revitalization of Seattle after the fire. The red in the map seems to indicate, as did some other contemporaneous city views, the city’s brick buildings. In the downtown region, this red, playing between the red of flames and the red of brick, reinforces the rhetoric of a city strengthened by fire. 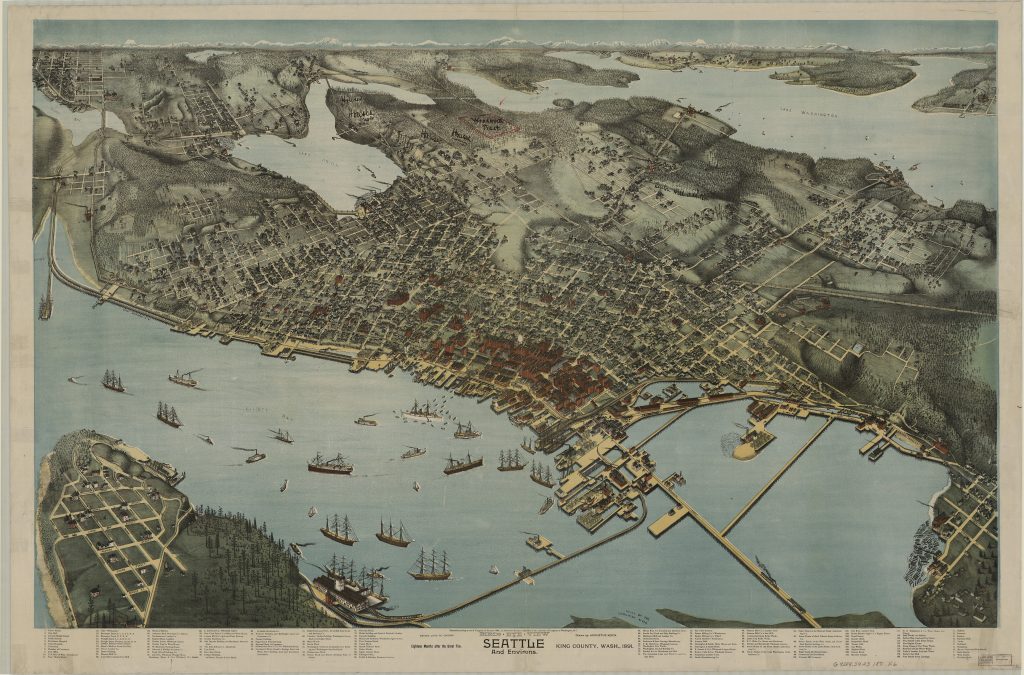