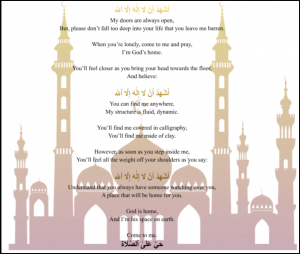 Week 6: The Art, Architecture, Symbolism, and Decor of Mosques

Second Project (Poem):
بيت is a poem bringing mosques to life through a message aimed to all the people in the world who are looking for a place to feel loved and welcome. This poem also brushes past the idea of architectural designs which can be found in mosques as they are the known prayer sites for Muslims across the world.

Poetry plays a significant role in Islamic history. In fact, pre-Islamic culture was constructed with poetry at the drive of verbal art. As Islam was rising and the Qur’an was becoming the holy physical example of God through his words, poets felt neglected. In fact, poets began rivalries with Mohammed (PBUH) due to the fact that people were now so focused on Mohammed’s (PBUH) messages (Asani, Lecture 10/03).  Poets caused chaos to the extent that they were condemned in the Qur’an for being driven by egotistical desires. A great example of this can be seen with well know poet Zuhayr who was one of the composers of the seven hanging poems). He had conflicts with Mohammed (PBUH), but later came around to eventually write him one of the most famous poems of all time in Islamic context called “Banat Su’ad” (Asani, Lecture 10/08). In some communities, Mohammed (PBUH) was considered to be a poet, “…when Muhammed first began reciting verses of particular power and beauty, some called him a poet” (Sells 7). However, to describe the Qur’an as poetry gives it a human aspect which defeats the notion that it holds God’s words. Thus, poetry began to evolve as an outlet for depicting Islam in artistic ways, whether it be depictions of the prophets, or to express the power of God.

The piece presented above is aimed at shedding light on the power of God’s home on earth— mosques. A crucial part of the mosque setting for Muslims is the call to prayer otherwise known as the adhan. The adhan consists of multiple lines reflecting the shahada, which for Islam is the way to submit to God. Monotheism is a vital part of Islam and is in fact what’s at the head of Islam. This can be depicted in the poem as the Arabic writing from the adhan (أَشْهَدُ أَنْ لَا إِلَٰهَ إِلَّا ٱلله/I bear witness that there is no deity but God). As the mosque speaks to the audience, it reflects a welcoming atmosphere for the people, one that is constantly there for the people. Also, in writing this piece, the focus was on a physical demonstration of Islam. Therefore, Islam can be presented in a diverse form of mosques whether it be in culture of the community the mosque resides in, the design of the mosque, and/or ethnicity of the people who attend the mosques. In fact structure did not affect the importance of a mosque; a mosque is a mosque, “The direct relationship between architectural form and function familiar from Western or Christian cultural history does not apply in the case of the mosque” (Frishman and Kahn 32). In reference to the architectural design of mosques, the piece brushes past the idea that mosques can be diverse in their build (introducing the idea that mosques can be made of clay or can have a variety of designs— including the amount of calligraphy demonstrated throughout the mosque). In reflecting on this piece, mosques are a physical depiction of Islam and come in all shapes, forms, style— their importance does not change.