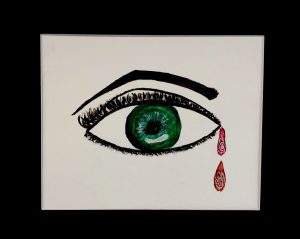 Week 11: Sir Muhammad Iqbal and the Creation of Pakistan; the Iranian Revolution

In the final project, I painted an eye crying blood with the word Allah. This is because I wanted to create a double-edged sword— a piece in which the lens at which you interpret it may be different. My purpose of this painting is to demonstrate the power of revolution of those being oppressed by their own religion because of the perspectives of the religion by others. Islam is not a bad religion, but people’s perspectives of Islam can be bad (Asani/Lecture 11/05). This can be seen through the eye of someone being oppressed by someone’s way of interpreting Islam. However, the other may perspective may be that Islam is seen as an oppressive religion, a rather ignorant perspective— for a religion can’t be oppressive, but people’s interpretations can be.

Revolutions rise when those being oppressed do not allow for the continuum of their oppression, “The mistake that some religious governments make is that they want to take their people to heaven by force, but a heaven that is forced on you is hell,” (Ebadi). Essentially, revolutions start from sudden change and momentum of the marginalized perspective.

Thus, it is important to recognize the role of how people’s perspectives on religion can be detrimental to a society. In fact, religion can become a means of gaining power at the expense of the perception of the religion. This  means that it is important that a religion can embody all people regardless of sex, ethnicity, sexual orientation, etc., “We need a religion that respects the rights of all…a progressive religion, rather than a traditional religion that tramples the people…one must be a good person, a pure person. We must not say that if you are not with us we can do whatever we want to you. By behaving as we do, we are trampling on our own religious principles.” (Aghajari). When we recognize the role that people have on religion, we are able to acknowledge the reality of the people, not of the religion— for religion speaks for itself (through doctrine, literature, arts, etc.).

I couldn’t have created this painting without the support of my colleague, Heba.