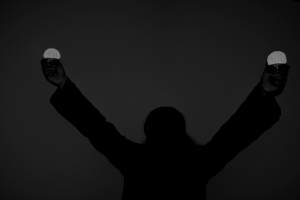 Week 4: Prophet Muhammed as Paradigm, the Mi’raj, and Poetry in Praise of the Prophet

Take the moment to think and reflect about how this picture makes you feel. I have taken a survey of how others felt about this picture and to my surprise the results were quite interesting. In my perspective, at first glance this picture felt dark and eerie. However, to others, this picture felt “holy”, “personal”, “powerful”. The goal of this piece was to reflect on multiple concepts— the depiction of Mohammed (PBUH), the idea of light in Islam, and shattering stereotypes of female oppression in Islam.

To begin with the depiction of Mohammed (PBUH), it’s important to note that this is quite a difficult task. This is because no one knows Mohammed’s (PBUH) true physical figure, therefore, in some communities it may be forbidden to depict him as a human, while in others it’s allowed. In fact, most of Mohammed’s (PBUH) depictions are represented in words and hilyaas; hilyaas being devotional icons which consist of the head, body, feet, in terms of words. Essentially, they encapsulate the attributes of the prophet in calligraphy (Asani, Lecture 10/01). Thus, in this piece, the goal was to demonstrate a faceless figure to represent the anonymity of Mohammed (PBUH).

The second idea reflected in this piece is the idea of light in Islam. In fact, prophet Mohammed (PBUH) has a hadith which states, “‘I am [made] of God’s light and all created beings [are made] of my light'” (Hadith). Therefore, there is this idea that light came first and is instilled within the people. Also, this can be expressed in the Qur’an, “Allah is the light of the heavens and the earth” (Qur’an 24:35). In terms of Islam, the general idea of guidance and God as the light in darkness is vastly demonstrated. God is the light and this is presented in all His creations, “The whole universe has been enlightened and illuminated by His light” (Imam Mizra). In this piece, Allah is reflected within the light that is held by the undepicted holy figure. This aims towards expressing the power of light in Islam.

Lastly, inspired by Amirah Sackett is the notion of shattering stereotypes on female oppression in Islam; she expressed her way of shattering the stereotypes by discussing how dancing in the niqab (full covering) has broken the thought that women are limited in Islam (Sackett, Lecture 10/15). In the piece, a female wearing a abaya— a loose dress that Muslim women wear—is holding the light of God. This exemplifies the idea that female have power in Islam. Some perspectives may think that women are oppressed because of the “strict” rules places on female clothing, however, women are held with higher importance in the realm of Islam— making Islam quite a feminist religion. This can be reflected in the following, “‘Never will I allow to be the lost the work of [any] worker among you, whether male or female; you are of one another'” (Qur’an 3:195). Therefore, this piece hits the idea that women are carried in the light just as much as men, thus, shattering the widely believed idea that women are oppressed. In reflecting on this piece, it’s important to note that Mohammed (PBUH) is difficult to depict, light is a fundamental concept in Islam, and women are not oppressed as others may think.