“‘This process, in part, is trying to figure out what is the right size,’ said Fuller.”

I have news for Mayor Fuller: The “right size” of the Riverside development is already known.

The last time local residents were asked for input to right-size development at Riverside, discussions took more than five years. The resulting agreement, finalized in 2013, determined that the right size for Riverside was 580,000 square feet, including nearly 300 hundred new housing units.

It’s not local residents who want to go through this process all over again. It’s being driven by developer Robert Korff and his business partner BH Normandy (who negotiated the 2013 agreement). Instead of the agreed-upon 580,000 square feet, they are demanding 1.5 million square feet, including two 200+ foot tall towers, and many hundreds of additional units of luxury housing. They stand to add hundreds of millions of dollars in additional value to their project, while residents of Auburndale, Newton Lower Falls, Waban, West Newton, and other parts of Newton are saddled with massive costs related to traffic, schools, infrastructure, planning, and more.

And despite the mayor’s insistence that she is listening to local residents, the evidence that we see in the actions and policies of her administration is that while we may be heard, the preferences of Newton Voters are largely ignored.

For example, the Newtonville Area Council’s recent survey of Newton residents found that (Per NAC email: “Actually, it was 4% of all respondents, and 5% of those with a height preference”) were receptive to buildings five or more storeys tall along Washington Street. Of those who expressed an opinion about the number of housing units, 86% supported 500 or less.

Similar opinions were articulated during the long “Hello Washington Street” visioning process. The following comments were left by citizens on one of the “pop-up” centers in West Newton to collect feedback about Washington Street: 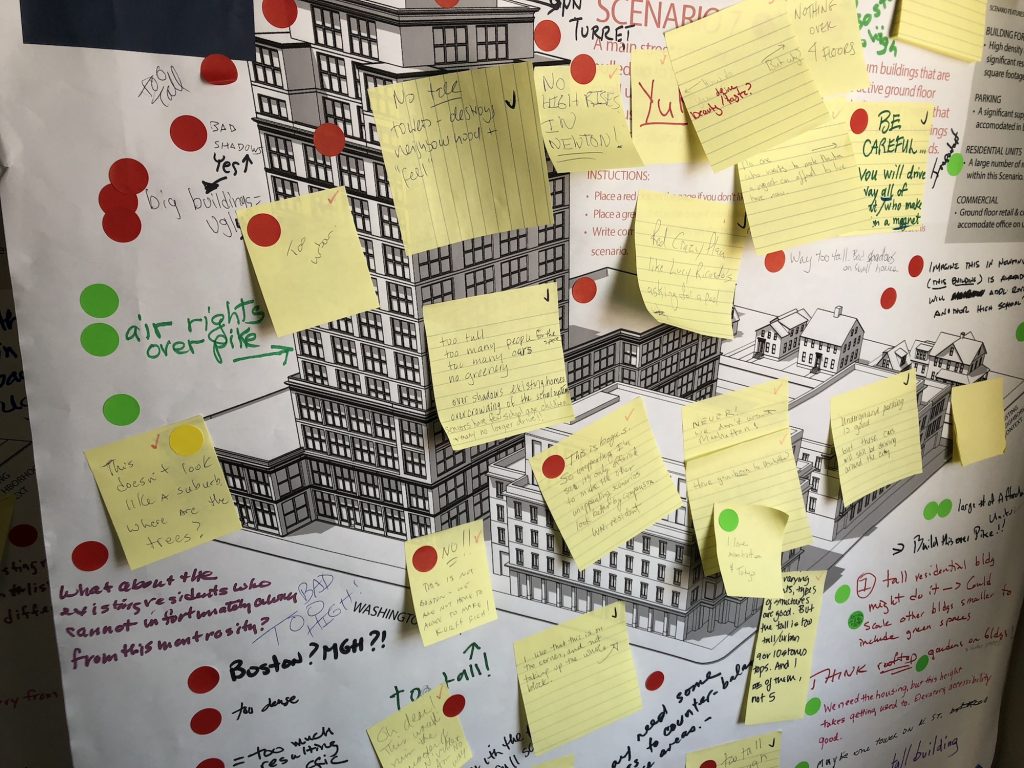 “Too tall”
“Too big”
“Bad shadows”
“Big buildings ugly”
“Too urban”
“Air rights over pike”
“This doesn’t look like a suburb. Where are the trees?”
“No trees. Towers destroy neighborhood feel”
“Too tall. Too many people for the space. Too many cars. Overshadows existing homes. Overcrowding of the school system.”
“Seniors have few school age children and many no longer drive.”
“This is bogus. So unappealing I;m sure it’s only offered to make the other scenarios look better by comparison. West Newton resident.”
“No. This is not Boston. We do not have to agree to make Korff rich.”
“Never. We don’t wan’t Manhattan. “
“Have you been to Manhattan?”
“I love Manhattan and Tokyo.”
“No high rises in Newton!”
“Be careful. You will drive away all of the [] who make Newton a magnet.”
“No one who wants to make Newton a magnet can afford to live here now.”
“Underground parking is good. But these cars will still be driving around the city.”
“Way too tall. Big shadows on small houses.”
“Large number of affordable units”
“Build this over the pike”
“What about the existing residents who cannot unfortunately [] this monstrosity”
“Boston? MGH?”

Now that the second draft of the vision and zoning plans for Washington Street have been published, it’s clear that there is a huge gap in what residents asked for and what we will be getting. Huge tracts of land from West Newton Square to the Armory/Trader Joes, parts of Newtonville on either side of the Pike, the lots where Marty’s and Whole Foods now stand, and the commercial parcels diagonally opposite Our Lady’s church in the Lake, will fall under the new “Village Gateway” (W-VY), “Station Area Central” (W-SC), and “Station Area Commercial” (W-SM) zoning designations: 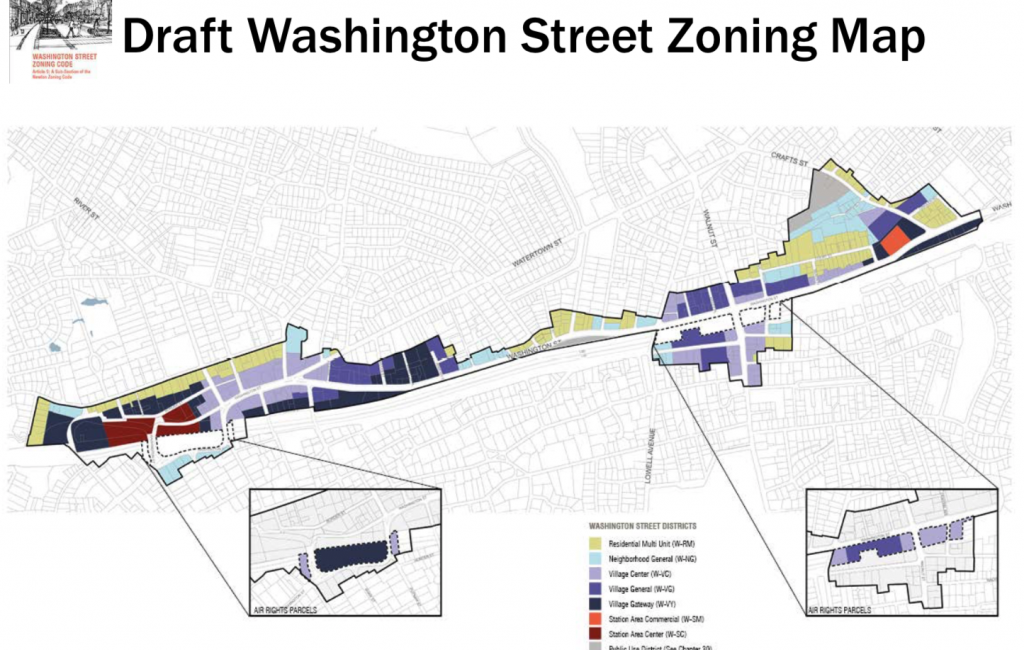 Nobody cares about preserving an MBTA parking lot (or, for that matter, run-down commercial properties along Washington Street). But when it comes to replacing what’s there now, the people of Newton are tired of negotiating deals that are later ripped up because developers insist on getting more, and participating in acts of political theater in which their opinions are solicited and subsequently ignored. Any new vision for Riverside should align with what we asked for — and the city, the MBTA, and developers agreed to — six years ago.

If you are a Newton resident, please contact ALL Newton City councilors TODAY (easy way: EMAIL THEM ALL AT ONCE via citycouncil@newtonma.gov) and let them know what you think about the Riverside development. Even if you don’t live in Auburndale or Newton Lower Falls, your taxes will end up paying for developers’ profits through increased road, school, infrastructure, and other costs. The developers’ tactics to rip up a signed agreement also sets a precedent for similar tricks in the future all over Newton, including Washington Street, Newton Upper Falls, Newtonville, and elsewhere.