A few weeks ago, the New York Times published an article titled They Expected Luxury. They Got Leaky Ceilings and Broken Elevators. While the article was about pandemic-era construction, the comment from someone who claimed to have worked in Manhattan real estate development pointed to a problem that has been ongoing for many years:

I worked in luxury construction in Manhattan for nearly two decades, building and installing every type of bespoke metalwork that architects and designers could imagine. I was almost always appalled by the dysfunction on job sites, even on projects with multi-million-dollar budgets. In my opinion most of it was the result of construction companies hiring the cheapest possible labor and pushing them to go too fast. I can’t count how many times “bargain” laborers damaged my work or that of other craftspeople involved, simply because they were inexperienced or poorly managed. Until developers and general contractors begin to truly respect EVERYONE involved, whether they’re skilled artisans or merely sweeping up the sawdust, these problems will continue.

Another commenter said that the problem wasn’t only in New York:

Not just New York! I moved into a BRAND NEW “luxury” mid-rise in Florida in 2020 (building opened December 2019). Such terrible terrible awful construction! So glad I was only there for some months. Worst living experience I’ve ever had and that was the most expensive place I’ve ever lived in my life. Examples: Slanted (instead of straight) handing kitchen lights. Super thin walls – could hear my neighbor sneeze rooms away. The three elevators (placed in very awkward locations) took turns being broken every single month. Broken coffee machine. Thin exterior walls – could never sleep bc you can hear the highway all day and night. Leaning cabinets. Peeling wooden floors. Warped balcony doors. Low water flow (wouldn’t send solids down the toilet so I’d have to pour water in to manually flush!). And remember… this was a brand new place. I was the first ever occupant.

The best builders and contractors and sub-contractors have to turn down work because they’re in such high demand and so who gets those jobs instead of then? A lot of people who are learning on the job and making a lot of mistakes. Many of those “luxury” buildings are not luxury construction. EVEN in super high-end buildings you still get issues so it’s no surprise that with the sheer amount of building in NYC places that claim to be “luxury” are certainly not and full of behind the sheetrock fixes. If you’re going to buy find out who the builder is and do your research. I’m not talking about the developer, I’m talking about the company in charge of the actual building process. Then look up one of their buildings and see how it’s doing a couple of years down the road. And look in the cabinets and check the finishing work. Look at the plumbing under the sink and behind the toilet… How well is it finished? Go to the basement and get into the service areas and see what it looks like where there’s no sheetrock. Walk down the stairs and look at the concrete and the electric conduit and water pipes. You’ll start to see how much care and oversight was put into a building.

Reading these comments, I was reminded of the scenes outside of Trio Newton when it first opened on Washington Street in Newtonville, on the site of the former Orr block (Karoun, Ken Kaye Crafts, Newtoville Camera, etc.). Trio is the luxury apartment block built by Mark Development after steamrolling opposition from local neighbors and northside ward councilors with the help of the Newton-Needham Chamber of Commerce and pro-development politicians like Newton’s former Mayor Setti Warren (see “Upzoning” in Newton: A tool to turn over the city from one class of people to another?).

When going to the Newtonville Post Office next door to Trio in 2020, I noticed long straps of plastic-like material hanging from an overhang above (below the 2nd floor of Trio). One strip was so low to the ground that someone could jump up and pull it down.

I wasn’t the only one to notice something was amiss. In April 2021, Ward 2 Councillor Julia Malakie compiled a list of other construction problems she had observed at Trio Newton under the heading “Is Trio Tired?” and shared it with her newsletter subscribers: 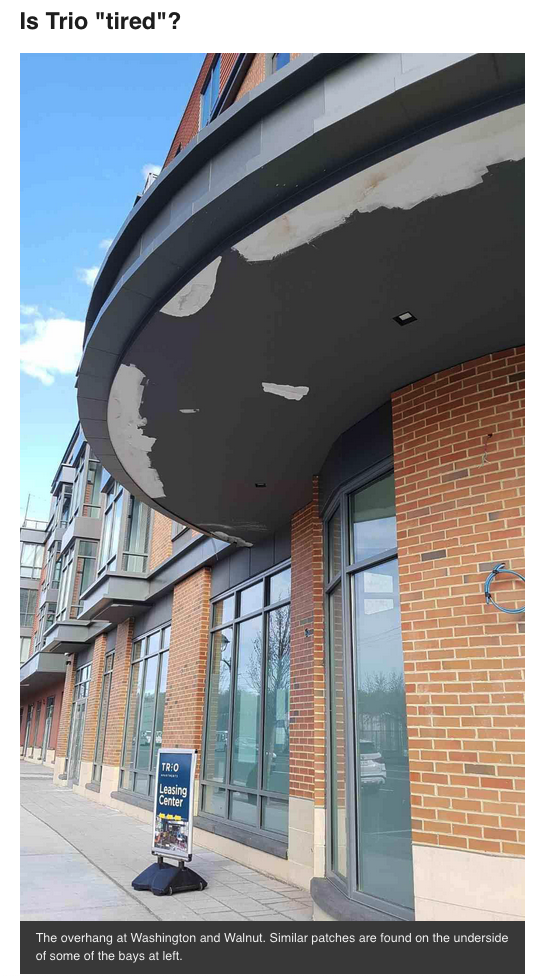 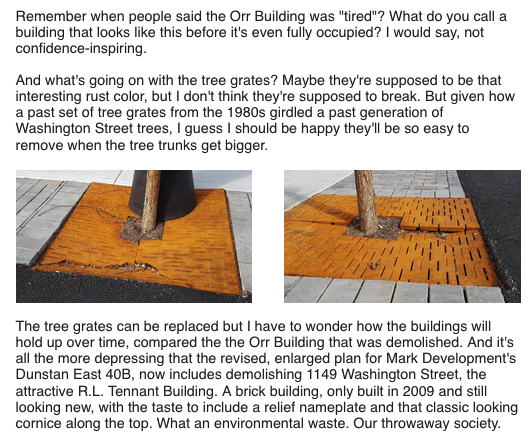 That wasn’t all. Other parts of the brand-new Trio showed signs of poor construction: 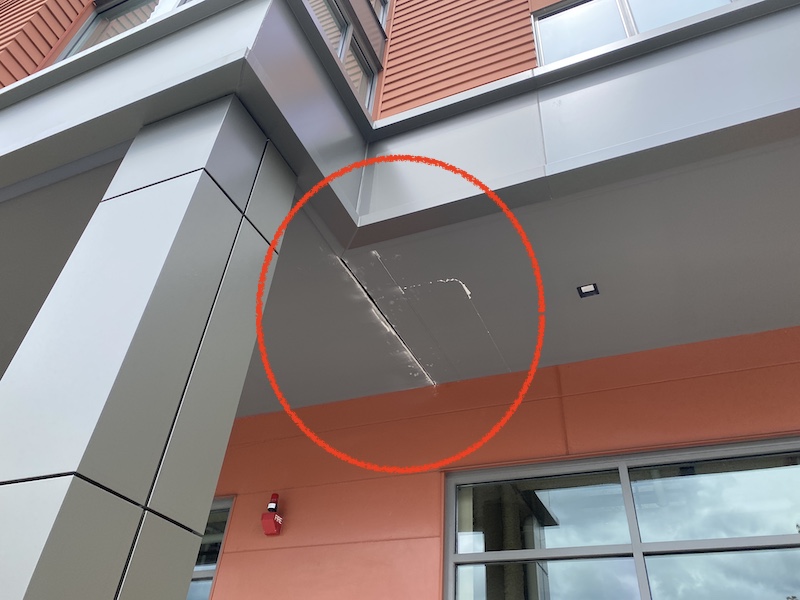 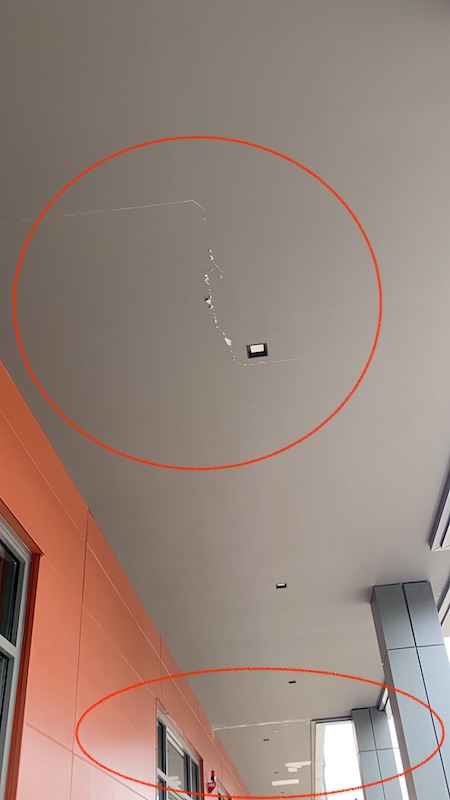 Despite Mark Development promising the moon to neighbors and councilors, this is what Trio looked like less than one year after its official opening. These problems have since been fixed, but I wonder about other issues that can’t be seen from the street. If anyone has knowledge, please leave your comments below.

Keep in mind that Mark Development has been given the green light by the Mayor and a bloc of pro-luxury development City Councillors (mostly from south-side wards, far away from any of these projects) to build not only overpriced rentals for the rich, but also science labs for pharmaceutical companies … and potentially housing for Newton’s seniors.

Mark Development is now planning another giant 7-story development on the Newtonville/Lake border. As noted by Ward 1 Councillor John Oliver in his newsletter:

Two concerns that I have heard most frequently, and share, are that the building exceeds even the generous allocation in the Washington Street Vision Plan, as well as how the developer intends to satisfy their Inclusionary housing requirements (ie., affordable units).

Substandard work on these types of buildings is not only unacceptable, it risks the safety of Newton residents.

Yet we hear nothing from Mayor Fuller and the pro-luxury development bloc in the City Council. Has any City Councillor from the southside wards ever challenged Mark Development about stuff falling apart at Trio, or the implications for future construction at Riverside in Auburndale or Washington Street, including scientific labs and housing for senior citizens?